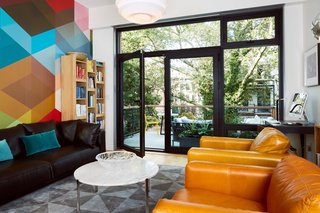 Somewhere in it’s history, this classic single family Harlem brownstone was converted to a four family apartment building and, in the process, all historic detail and character behind the historic façade was removed. Exposed sprinkler piping and HVAC ductwork was installed, and a new switchback stair serving the residences was woven through the house. Our task was to convert this four-family house, both aesthetically and functionally, back into a home for a single family for a psychiatric doctor, her husband – a former musical composer and current family councilor- and their three boys. The floors were combined back into a single home and a 12 foot extension was created at the rear on two floors with a new rear façade.

In the process, two strategies were employed.

First, the detailing and design choices are an essay illustrating the process of the current and previous conversion. We decided that the exposed service elements, ductwork and sprinkler piping, would be retained and expanded, cleaned up, repainted, and made a part of the design aesthetic. This was also a cost saving measure, as we were able to retain much of the existing equipment and systems. Ducts were cleaned up with new diffusers, and piping was painted. To augment the existing exposed infrastructure, we left all steel framing for the rear extension exposed and painted. Select exposed brickwork was patched and painted at the stair and kitchen. New elements such as the stair stringer design and the reclaimed planks of the new stair and screen wall were designed to fit in with the modern industrial aesthetic. Lighting at the stairwell plays on this theme as well, with exposed conduit run on the brick walls laid out in a playful pattern. The new window wall and concrete panel cladding at the rear façade were also designed to pick up on this utilitarian aesthetic.

The second strategy at work lies in the layout and configuration of the house. The functional problem to solve rested in the small floor plate (18’ wide) of this townhouse. How do you fit a family’s full common activities – living/dining/cooking – on one floor? You don’t. In addition, the layout had to accommodate a small parlor for the doctor to see patients close to the entry and separate from the mud room in the garden level, where children would be storming in and out on a regular basis. The strategy was to arrange the common living spaces on three levels at the rear of the house, all facing the large glazing connecting these spaces to the garden. Next, we flipped the orientation of the switchback stair to face the rear of the house, allowing a direct connection to all of these spaces. On the parlor level we have kitchen and dining, on the garden level the main living room, and on the 2nd floor off of the rear roof terrace we placed a rec room/den space. Having carved out the public space of the house on the rear of the first three floors, the bedrooms and more private, intimate spaces occupy the front façade and its smaller windows on the street with the top floor reserved for the children’s rooms.

A good deal credit for the final feel of the house goes to the owner’s excellent choices in furniture, artwork, lighting and wallpaper. The lighting selections integrate seamlessly with the functional aesthetic while offering visual punctuation. Bold colors introduced through wallpaper and artwork enlivens all of the spaces.

Opera Studio Architecture uploaded Harlem Townhouse through Add A Home.
Add your own project for the chance to be featured in Editor’s Picks.