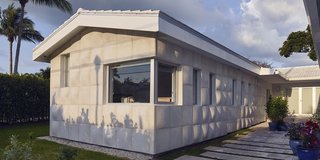 There’s a saying, according to Nick Gelpi, that architects don’t design details in Miami, they shop for them. That’s because strict product-approval guidelines can leave designers with a limited palette of materials to choose from in this hurricane-prone region. While the challenge would discourage some, Gelpi embraced it head-on when he traded a post at Steven Holl’s internationally recognized firm in New York City for his own practice in Miami Beach.

With his 1960s ranch house in Mid-Beach as a testing ground, Gelpi wrapped the facade in a grid of curved tiles made of a wood-based concrete from Belgium, a new hybrid that he has helped fine-tune in the United States. Here, he shares the interwoven story of his home’s origins and an emerging material’s potential.

Nick Gelpi: The original house is typical of midcentury Miami Beach, somewhat small for its neighborhood, but it’s interesting in its renovation. We totally reconfigured the interior, took out all the walls, and really opened it up. It’s a house with some highly customized interventions in space: built-in furniture on the inside and custom textured panels on the exterior. We softened it through experimentation and adding some playful design moves.

It wasn’t in disrepair, but it had had a series of cosmetic renovations. Once we started peeling away the layers, we realized a lot of things needed to be replaced. We kept the existing roof, but we repaired it. We kept the exterior walls, but we introduced new windows. It was originally a two-bedroom that we converted to three smaller bedrooms with an addition. Several people suggested that we demolish the house, but we wanted to save it.

I’m a professor at Florida International University, and prior to the renovation, my students and I worked on a grant sponsored by private industry to explore the potential applications of a wood-based concrete that a man in Belgium, Paul Portier, had innovated. We looked at ways to bring this material to Florida, using an invasive tree species as an ingredient, which seemed like a nice solution to an environmental problem. Ultimately, my wife said, “Why don’t we just use our house as a case study?”

We chose to test the material as a tile. It’s basically a three-inch-thick concrete panel with a special mineralized wood core. The precast panels are made by taking pieces of an invasive tree species from the Everglades, chipping them, mineralizing the wood chips, and then casting them into cement—basically making a wood-based concrete. There’s a flat tile and three others that bulge out one, two, or three inches. They’re each precast and then individually hung on the concrete block structure with typical precast clips.

We wanted it to seem almost like something was bubbling up from below the surface. We 3D-printed a series of tiles and arranged them in different orientations. If you look at the elevations, they create kind of a diagonal wave pattern, which we thought was appropriate because we’re about a quarter mile from the ocean.

Kids and adults alike ask questions. They can’t help but go up and touch it, which is unusual for a home. You don’t typically pet buildings.

“For the majority of the day, when the sun is high, you almost don’t notice the texture on the exterior. It just fades into a flat wash,” says designer Nick Gelpi of the undulating wood-based concrete tiles that clad his home in Miami Beach. “But at moments, the sun hits at a certain angle and really activates the surface.”
-
Miami, Florida
Dwell Magazine : July / August 2017

The tiles’ forms inspired the soft, curving shapes of Gelpi’s furniture designs, including an ash breakfast table, built by Nick Gilmore. With its views of the courtyard, Glo-Ball pendant by Jasper Morrison for Flos, and vintage chairs, this spot is a family favorite.
-
Miami, Florida
Dwell Magazine : July / August 2017

A 450-square-foot addition reconfigured the ranch house from an L- to a U-shape.
-
Miami, Florida
Dwell Magazine : July / August 2017

When the house’s existing slab proved too damaged, Gelpi opted for a terrazzo floor tile by Perpetua in the same dimensions as the exterior tiles.
-
Miami, Florida
Dwell Magazine : July / August 2017

The tiles were cast from urethane rubber molds.

These were based on plywood masters.

The wood-based concrete uses chips from the melaleuca tree, a species originally from Australia.

The team created test cylinders to evaluate the strength of varying blends of the aggregate material.