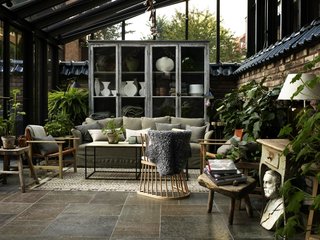 Many hotels have figured out how to make guests feel at home, but Ett Hem in Stockholm goes above and beyond.

Initially built in 1910 by architect Fredrik Dahlberg, the Arts and Crafts house sits in a residential area of the city and has been converted into a 12-bedroom boutique hotel where visitors are invited to treat the space as if it’s their own. Owner Jeanette Mix worked closely with designer Ilse Crawford to make this delicate transition happen. Crawford was tasked with making sure the original personality was kept intact, but that it holds all of the necessities needed for the modern traveler.

Ett Hem was originally built as a residence for a government official and his wife and was inspired by the look of Karin Larsson, who was known for collecting objects, textiles, and furniture from all over Sweden. Thanks to Crawford, this eclectic aesthetic has remained consistent to this day, but has been updated with just the right modern additions. The result is a mix of old and new that celebrates Swedish charm, but also caters to functional, modern living.