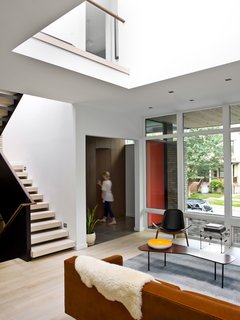 The defining characteristic of this house is its contextual responsiveness. While contemporary in expression, it relates to its Lincoln Square location in a number of ways. Its scale aligns with the surrounding century-old houses. The generous front porch repeats a common detail of the block and serves as a spot to hangout and socialize with neighbors. The exterior’s board and batten siding was inspired by the wood cladding of other frame houses in the district.

While the site had many advantages, one contextual constraint was the pair of large houses that hug the property. These structures prompted the pulling of sunlight into the interior in innovative ways without compromising privacy. An exterior atrium cuts into the core of the house bringing light into what normally would be its darkest parts. The atrium footprint is evoked in a double height space that houses the staircase and it is topped with a series of skylights that flood the space with light on even the cloudiest of days. Clerestory windows appear at multiple locations including on the west side of the kitchen where they perfectly frame the view of a large birch tree and provide a wash of light along the surface of the ceiling at sunset. A slight tinting on the south facing windows minimizes solar heat gain at the back of the house while the same tint on the street facing windows enhances privacy.

Despite the expanses of glass, the house far surpasses energy standards due to a number of features. A carefully calibrated mix of seven types of insulation optimizes thermal performance. Motorized dampers reduce energy costs and increase comfort. The neighborhood, with its direct links to public transportation, plethora of services, and its extreme walkability embraces the best aspects of urban living.

Searl Lamaster Howe uploaded Eastwood Residence through Add A Home.
Add your own project for the chance to be featured in Editor’s Picks.