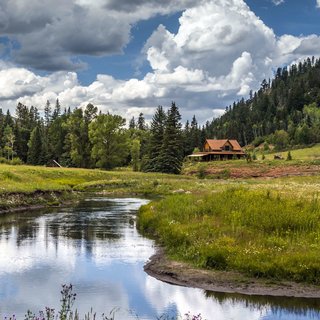 You may already know about Dunton Hot Springs, an abandoned prospectors’ camp whose twelve cabins and one tent comprise what’s probably southwestern Colorado’s most inspired lodging. But as is so often the case with extraordinary small hotels, interest far outstrips capacity — which is why the latest expansion, Dunton River Camp, is such a welcome addition to the landscape.

It’s a summer-only retreat, made up as it is of eight freestanding tents — they’re big, and set on wooden platforms, but they’re not quite winter-worthy. No matter — summer is when this one-time cattle ranch alongside the West Fork of the Dolores River is at its most magical.

Four River Tents sit just a few feet above the river’s edge, which makes them perfect for fishing, while four Mountain Tents sit up the hill, surrounded by aspen trees. Both come with king beds and en-suite bathrooms complete with a six-foot soaking tub and shower, and are heated by gas stoves — probably a bit more elaborate than what the word “tent” ordinarily implies. It’s about as plush as camping could possibly be, and guests are far more immersed in their natural surroundings than any permanent structure would allow.

Meals are served communally in the central Farmhouse, on the deck by the riverside, or privately, and they’re prepared by a team of chefs who make use of ingredients from the hotel’s farm. There’s a spa tent, in case you need something even more relaxing than your own, and if fly fishing is your bag, you’re in paradise here. And if that’s not enough adventure, you’re perfectly placed for horseback outings, river rafting excursions, mountain biking, hiking, trail running, and all manner of mountain sports. We’ve got a feeling this’ll go on a whole lot of wish lists.