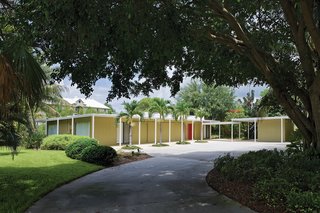 The house was built in 1955 for former City of Sarasota Mayor David Cohen and his wife, Eleene, is a classic example of the Sarasota School of Architecture movement, with glass walls that open completely to the elements. Cohen, a violinist, was a co-founder of the then-Florida West Coast Symphony (now known as the Sarasota Orchestra).

Cohen championed the building of the city-owned Van Wezel Performing Arts Hall (1970, William Wesley Peters, Taliesen Associated Architects). The Van Wezel is under threat of demolition in 2018 as the city and Sasaki Architects present plans to redesign the bayfront.

uploaded David Cohen House through Add A Home.
Add your own project for the chance to be featured in Editor’s Picks.

1955 photo of the David Cohen House on Siesta Key, Florida

David Cohen, the original owner, was a violinist and co-founder of the then-Florida West Coast Symphony. The architect Paul Rudolph included a conversation pit in the living room where musicians would gather to play chamber music.

Chair detail: the furniture was originally positioned along the top edge of the conversation pit.