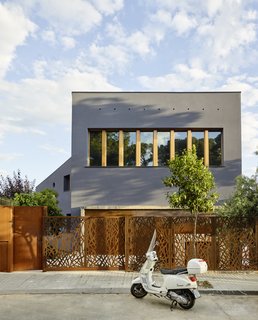 This house was designed in the 1950s by a local artist for his family. In those days a leafy suburb with single family dwellings, the area has now become an integral part of the city. The new owners, who fell for the possibility of city-living in a fairly quiet neighbourhood with unbeatable views towards the Mediterranean, hired ZEST to take on the task of doing a complete overhaul to make this house ready for family living in the 21st century.

The challenge was to maintain some of the original charm of the house, which had some very special features and was rich in detail, but adapting it to the needs and taste of the new owners. The house was in in need of overall repair, and needed all the wiring and plumbing replaced.

ZEST decided to aim high (A-rating on the energy consumption label) with complete insulation of the façade using an Exterior Thermal Insulation System, finished in dark grey. The façade of the lower floor, which had an original finishing in local stone, has been insulated on the interior. Both the roof and the ground floor were insulated as well.

The heating system is a geothermal system with vertical wells, which powers the underfloor heating on the ground floor and in the bathrooms, and the old cast iron radiators that were found in the house and reused on the top floors. All windows are solid oak, with high performance double glazing and exterior solar protection. The plan is to add a Photovoltaic installation on the perfectly angled roof, once the Spanish regulations and tax system make that a viable option.

On the inside all wiring and plumbing were replaced with high quality systems. The house is controlled by GIRA domotics, to make management of heating, lighting, alarm and solar protection easier. One area where the wiring could not be changed, and which has been powered from the outside, is the amazing entrance hall, an original work by the first owner and designer of the house. It features a golden ceiling in three dimensional panelling, tree sculptures directly cut into the walls and a wonderful stained glass window with a sculpture of Sant Jordi, patron saint of the Catalans.

The distribution of the house was changed in places, to adapt to the new owner’s needs, with new bathrooms and kitchen layouts and designs, and new or bigger windows where necessary, including an additional access from the dining room to the garden. The garage did not fit the new owners’ car, which led to a redesign of part of the street façade, in order to create extra space and a slightly bigger opening. The organic style Corten fence was also a design by ZEST, inspired by the tree sculptures in the entrance hall.

The original owner was a sculptor and graphic designer and his studio on the top floor became the master bedroom, which is designed as a luxury suite with a bath and sitting area with fireplace. The original industrial façade was replaced by a series of 8 windows. Adjacent to this suite is the large home office. On this top floor the new owners found the house was curiously cut off from the amazing view. Solution: the creation of “el mirador” or look-out point, a small roof terrace from where the views over the city are nearly 360 degrees.

ZEST architecture uploaded Creueta House through Add A Home.
Add your own project for the chance to be featured in Editor’s Picks.

Entrance hall with original art from the 50's made by original owner.