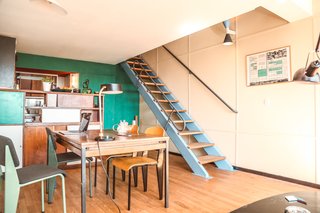 The famous Unite d’Habitation building in Berlin by Le Corbusier was not actually built the way Le Corbusier had envisioned it in 1958.
A team of designers and contractors lead by architect Philipp Mohr from 2016-2018 has done a meticulous and fantastical renovation of what an apartment in Berlin could have looked like. An interesting challenge that involved archival research, shopping for antiques and surveying of apartments from it’s ‚twins‘ in the Unité d’Habitation Marseille from1952 and a museum apartment built in Paris in 2008.
Mr. Mohr purchased the apartment in 2016 and became the investor for the gut-renovation as well. His goal was to rent or sell the apartment as a complete design-built project. The first phases were demolition and research at the same time. While comparing the measurements of the french apartments it became obvious that the structure of the Berlin building was the same but that the build out was entirely different. By lowering ceilings and moving walls it was possible to recreate the layout and spacial proportions that Corbusier had probably wanted in this apartment. In the archives of the Foundation Le Corbusier in Paris some plans showed that the Berlin apartments were supposed to be entirely the same as in France. A big fight between the Berlin authorities and Corbusier had made it possible that the interiors of the Unité in Berlin ended up with almost zero resemblance to what Corbusier’s plans had been . A 1950’s design team in Berlin
was in charge of altering all of Corbusier’s drawings without his consent. The young Berlin architect Jürgen Sawade was an intern at that office in the and reported about the his regretful work and how one drawing after another was completely changed.
In the current renovation the ceiling height has been lowered from 2,50m to 2,26m. The stairs and kitchen were removed and original parts of the kitchen and stairs from Marseille were purchased at auction and built in. Missing parts of the Kitchen and stairs were rebuilt using original plans. Paint colors were chosen from Corbusier’s paint chips which are available again today through Les Couleurs Suisse AG. Lamps and furniture were chosen after comparing photographs from the model apartments from 1952. The chrome steel furniture is still available through Cassina, in Berlin at DOPO DOMANI. Some lamps are available today as reproductions and some were auctioned through ebay or other sites. A large collection of Corbusier books fills the shelves and was purchased online as well in antique stores in Berlin, Marseille and Paris.
The design of the apartment makes Corbusier’s ideas and theories accessible. His five points of architecture can be experienced in this apartment and in the building: Open floor plan, Raised ground floor on pilotis; Free facade separating the interior form exterior constraints; Horizontal windows for equal lighting; Roof garden and terraces.
Color is a very important aspect of the interior as well as the exterior of the Unité and of Corbusier’s work in general. By researching his writings the design team around Mohr found several keys that allowed them to apply Corbusier’s color theory in the apartment design. Some of the wall paint was mixed using pigments that are still commonly used today.
The furniture in the apartment is a collection of mainly four french designers: Le Corbusier, Pierre Jeanneret, Jean Prouvé and Carlotte Perriand. Some liberties in assembling the furniture were taken as they don’t all belong exactly to the apartment originally and also not to the same time. For example Jeanneret’s furniture belongs to Corbusier’s projects in India and the steel furniture belongs to an earlier time period. However it all could have been assembled in a 1958 Berlin.
The apartment with the number 258 has been visited by many architects and scholars form around the world in 2018 and has been part of a photo shoot for the fashion Magazine Numero Berlin in 2018. A buyer has been found and the next phase of the project is about to begin. Philipp Mohr is a German-American designer with studio’s in Brooklyn and Berlin. His team has designed residential and retail projects in the US and Germany for the last two decades.

uploaded Corbusier Re-Renovation Berlin through Add A Home.
Add your own project for the chance to be featured in Editor’s Picks.