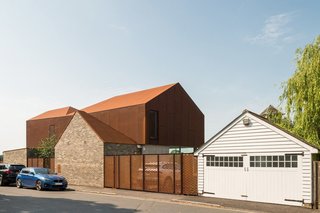 Perched along the banks of the River Ouse near the historic English town of Lewes is a Cor-Ten steel house with a "carved-away" ridge that's geometrically striking.

Though this 2,808-square-foot home in Lewes, East Sussex, England, used to be an old workshop, Sandy Rendel Architects transformed it into a beautiful modern home with a building shell that was made of SIPS (structured insulated panels), and prefabricated offsite. It's now available to buy for approximately $2.54 million.

Sited off a roughcast concrete river wall, within an area known as South Downs National Park, the property is set against an intense backdrop of a cliff that rises steeply from the ground.

The layout of the house orients the interiors in a way that allows for serene views of a river and low-lying meadow, while external pockets of shelter on the road-facing side serve as sound buffers.

A human scale is achieved with the addition of two single-story elements on the road-facing side of the house, along with a break in the roofline that makes the center of the ridge look as if it's been carved away.

The single-story elements protrude from the front elevation of the house to frame an entrance courtyard that's protected from the road by a mesh fence.

At ground level, an in situ concrete frame is infilled with local ash-glazed brickwork and glass. On the upper level, a continuous skin of Cor-Ten steel clads the walls and roof.

As the Cor-Ten steel weathers, it takes on an interesting ochre color, echoing the shade of the local red clay brickwork that's commonly seen in the Georgian and Victorian heritage houses in this part of England.

Inside, on the ground level, a capacious entrance hall opens onto a lateral living area that’s flanked by floor-to-ceiling glazing on three sides to reveal views of the river, cliff, and meadows.

At one end of this living area is a kitchen with two large islands of lava stone and cupboards hidden behind rough-sawn timber cladding. From the kitchen, sliding doors open to a sheltered terrace. On the opposite end of the kitchen is a lounge area with sliding doors that lead to another terrace and a garden beyond.

Also on the ground level is a study, utility room, and WC, which are housed under the single-story structures near the roadside frontage of the house.

An open-tread oak staircase leads to the first floor, where the five bedrooms are located. All of the bedrooms (one of which doubles as a study) are positioned along the river-facing side to make the most of the spectacular views.

With a dramatic form that complements its surroundings and heritage, this house won the RIBA 2017 National Award, a RIBA South East Award, and the Sunday Times British Home Award 2016 for the "best one-off home in the UK."

Though this 2,808-square-foot home in Lewes, East Sussex, England, used to be an old workshop, Sandy Rendel Architects transformed it into a beautiful modern home with a building shell that was made of SIPS (structured insulated panels), and prefabricated offsite.