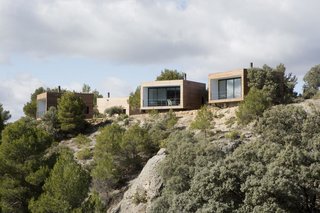 Spain is bigger than you think — big enough for more than one world-class metropolis, as well as a handful of famous tourist regions and several different official languages. And there’s still room for some seriously out-of-the-way places, of which the Aragonese province of Matarraña is just one. It’s a region that’s traditionally known for its ham, but that’s about to change — world-traveling designophiles will find it’s on their map thanks to a boutique hotel called Consolación.

It’s built from the bones of an old hermitage, and the old building still contains a couple of guest rooms and the bulk of the public spaces. But what’s most striking about Consolación is the modern architecture of the outlying guest rooms, each one a wooden cube perched at the edge of the bluff, with one glass wall (and an accompanying terrace) open to the view. Inside they’re decidedly high-end, with sunken slate baths and all manner of modern electronics, with sleek modern fittings and furnishings.

The restaurant, too, is deservedly well-known, and the kitchen is open — watch the chefs work at mealtime, or help yourself in between. A gorgeous hideaway in an unexplored corner of rural Spain, and whatever’s ailing you, you’ll find your consolation here.