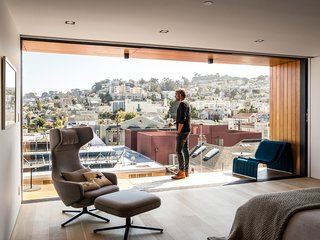 When Tom Conrad, VP of Product at Snapchat, and his wife, Kate Imbach, a writer and documentary filmmaker, went house hunting back in 2010, the first place they saw was also the last—the top unit of a spanking new spec building in the Noe Valley neighborhood of San Francisco.

“Architecturally, the house was nothing special,” says Tom. “We jokingly dubbed it ‘contractor contemporary.’ But it had qualities that are hard to find in San Francisco.” In a town littered with Victorians, the 3,300-square-foot, two-level flat was airy and open and flooded with light. “And even though it’s not on a hill, there were actual views. We weren’t staring into the side of someone’s kitchen,” adds Tom. “So we grabbed it.”

Plus, they loved the neighborhood, a sunny enclave that kisses both the Mission and Castro districts, with easy access to the BART (at the time, Tom was commuting to Oakland-based Pandora, which he cofounded). Kate had recently moved from Boston to be with Tom, whose housing history included a starter home nearby, a spacious Craftsman in Oakland, and a pre-earthquake warehouse South of Market. “I always wanted to come back to Noe Valley,” he notes. “It has the feeling of a small town, and the house is steps away from all the conveniences.”

The open-plan first floor is bookended by the living room and family room, with the kitchen and dining room in between. Four smallish bedrooms, three baths, and a loft area (now Tom’s office) were packed into the second floor—two bedrooms too many for a couple with no kids. So before moving in, Tom and Kate knocked down a wall, creating a master suite endowed with two bathrooms, two closets, and two side-by-side doors that opened onto a slim (four-foot deep) balcony that was separated from the interior by a wall, small windows, and intrusive soffits (so much for the prized views).

After three years, the couple decided it was time for a bedroom reboot. Kate approached a team of interior designers whose work she admired, Kathy Vuong and Farhan Qazi of FQ Designs Group, who in turn brought aboard architect Jon Peterson of Design Conspiracy.

Since the rest of the house had wood flooring, Vuong and Qazi proposed large modern Italian tiles for the bedroom, to avoid the meeting of disparate woods at the threshold. But Tom and Kate craved the warmth of wood, and when they settled on solid planks of French white oak, it wasn’t hard to convince them to extend it across the entire top floor . . . and then down to the floor below.

As construction got under way, Kate and Tom took off traveling, checking in via text and email. “So now we’re in Europe,” recalls Tom, “and I’m lying there wide awake, wondering how these old stairs are going to fit with the new flooring, without some weird Frankenstein effect.” So Peterson (who has a passion for stairs) was enlisted to create a more sculptural connection between the two floors, and used the same white oak to clad a column housing the plumbing. He also replaced the staircase walls with glass, for greater openness.

Then Tom had an epiphany (his first of many): “Since we were going to the trouble of installing floor-to-ceiling sliding glass doors in the bedroom, why not do the same thing on the deck downstairs?” Soon thereafter, the renovation officially ceased to be thought of as a bedroom remodel, and the house was taken down to the studs. It was also around this time that Kate bowed out of the project.

“We’d been gone about eight weeks at this point, and they had to install the beams above the sliding deck doors,” Tom remembers. “Farhan sent me a video of these massive steel I-beams being craned over from the Whole Foods parking lot, at least seventy-five yards away. And that’s when Kate lost it.” Explains Kate, “I was thrilled about the remodel, but it was just too stressful.”

“I made at least ten thousand decisions before it was over, and she never saw a single photo, sample, or drawing,” confirms Tom. “I thought about this project—room by room, corner by corner, outlet by outlet—all day every day, for the entire eighteen months.” Says Qazi, “Tom wasn’t so much a client as a collaborator. He was attuned to the smallest detail, as you’d expect from an engineer. And everywhere they traveled, he would find inspiration, from a silk rug on the floor to the shape
of the ice in a cocktail.”

The bedroom became a kind of petri dish for the rest of the house, starting with the restrained use of materials, which included replacing all the floorboards with quarter-inch reveals and frameless doors that close flush with the wall. Tom recalls it as a massive headache for all concerned: “I really wanted the doors to close flush on the outside, regardless of the way they swung, and this turned out to be surprisingly tricky, because of the jamb,” he explains. “Jon and I finally devised a custom system with a notch in the doors. And then I was at an Airbnb in Paris—built in, like, 1722—and it had exactly these doors, with exactly these details, and the very same notch, solved exactly the same way. I called Jon and said, ‘Oh look, we’re not so clever after all.’”

Tom had some decidedly non-18th-century ideas, too. From the start, he envisioned a media door that would open into the bedroom, with space inside to hide the cords, cable box, and Apple TV: “Jon was a miracle worker. He found the hinge the cable passes through and stays to code.”

Eighteen months after embarking on a simple bedroom remodel, Tom got to show Kate what he’d been up to. “I moved us in, put away the clothes, got the pictures up,” he says. “It was like the reveal from a home makeover show.” Kate took her time exploring. “I don’t even know how to describe it,” she says. “It was so crazy beautiful.”

“As the renovation got more and more elaborate, I imagined we were going to live here forever,” says Tom, who experienced a kind of post-partum depression when the project was completed. In the end, though, they got to spend only about four full months in the house before Tom was lured to Los Angeles by a job offer from Snapchat and they moved to Venice, taking just their clothes and one office chair.

Although the couple visit San Francisco often, the dream house is now more a dreamy pied-à-terre—albeit one filled with all of their furnishings, books, records, and artwork. Says Tom, “Somehow, it still feels like coming home.”

Tom Conrad and Kate Imbach’s first bedroom redo creates as many problems as it alleviated, blocking their view of Noe Valley behind a wall, for instance. Their second attempt, shown here, opened up the balcony, which has a Frame lounge by Francesco Rota for Paola Lenti. A Grand Repos chair by Antonio Citterio for Vitra faces the bed.

Tom and Kate own the top two floors of the building. On the lower level, in the double-height foyer, Milo Baughman’s Recliner 74 is positioned beneath Rudi Double Loop pendants by Lukas Peet for Roll &amp; Hill. The floor lamp is a custom piece that De Angelis Designs adapted from a vintage salon hood dryer.

Like the bed and built-in nightstand, the door is by Lloyd’s Custom Woodwork. The WGS stool near the vanity is by Gallotti&amp;Radice.

In the master bathroom, a freestanding Waterworks tub is paired with a Fantini fixture. Calacatta marble surrounds the shower; the flooring is Evolution ceramic tile from Apavisa.

A pair of Tom Dixon Cog candle holders and a 3Guns vase by Suck UK are assembled atop a vintage teak sideboard.

In the living area, a restored Milo Baughman sofa and a Nelson Platform bench join an Ortal fireplace.

The black steel A110 pendants by Alvar Aalto match the Poliform ventilation hood and ebonized white oak cabinets by Leicht Haus. LED lighting is integrated into the island shelving. The drawers underneath are handleless and open electronically by touch using a servo drive.

Sonos speakers are wired throughout the house, complemented by Magico S3 standing speakers in the family room. The leather Lama lounger is by Ludovica and Roberto Palomba for Zanotta.