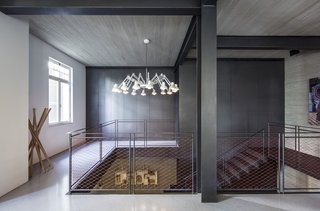 In a neighborhood of Tel Aviv known for Bauhaus design, Pitsou Kedem Architects does an industrial reboot from the ground floor up—starting with a new basement.

As Jewish immigrants from Europe began arriving in Tel Aviv in the 20s and 30s, architects from within their ranks brought Modernist ideas with them to the Mediterranean. The pedestrian-centered, garden-friendly metropolis became a hub of Bauhaus design, with architects such as Joseph Berlin working at such a prolific pace that Tel Aviv’s “White City” of International Style-buildings became the largest collection of such structures in the world. When Pitsou Kedem Architects was given the opportunity to renovate a Berlin-designed duplex in the neighborhood, the firm decided to respect history by making the story of the renovation obvious. By leaving raw materials and right angles everywhere, they provided a crisp contrast that juxtaposes the new with the past. While it’s not technically the same style as its Bauhaus neighbors, the new apartment provides another sharp perspective on modern design.

Patrick Sisson uploaded Minimal Reboot through Add A Home.
Add your own project for the chance to be featured in Editor’s Picks.

Formerly the home of David Ben-Gurion, the country's first prime minister, the apartment had both historic significance and severe restrictions awaiting the design team of Irene Goldberg, Tamar Berger, and Pitsou Kedem. To add space yet save the facade from the risk of damage, the architects came up with a novel solution: aim lower. A set of temporary beams and pillars allowed them to engineer and excavate a new basemant and create a massive well of open space, framed by the steel beams that define each floor.

While the lower floor was the site of more extensive work, the entire interior was redressed in a raw, industrial style, heightening the contast between old and new.

The new 860-square-foot basement contains a bathroom and additional living space. The designers chose to use pivoting glass doors so as to not cut into the space.

Pitsou Kedem's unique twist in the new basement is a two-part metal staircase with a gap in the middle. A slim Parentesi Floor Lamp illuminates the space.

The architects describe the home as one that "emphasizes the difference and the tension between romantic historical design and an industrial approach."

The raw industrial aesthetic gives way to a more livable space. The living area, featuring a B&B Italia Bend sofa and a Hans Wegner Shell Chair, flows into the open balcony that overlooks an adjacent courtyard.

The narrow balcony helps shade the residents while funneling the cool ocean breeze from the west.

From street level, the home maintains its historic facade. Keeping up with the neighbors is important when your neighborhood is a UNESCO World Heritage site.

An outdoor courtyard is a classic touch from the original structure.