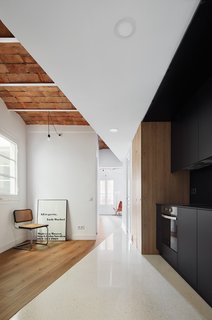 Ciutadella is a minimalist rehabilitation of a space located in Barcelona, Spain, designed by Allaround Lab. The space is situated in front of the most popular urban park in Barcelona: ​​Parc de la Ciutadella. Surrounded by an urban layout, the classic estate features high vaulted ceilings and original moldings. It is part of a building that consists of six dwellings per floor, with an irregular perimeter that is cut up to form a difficult arrangement of internal programs. The intervention consisted of the conservation of the perimeter, as well as the structural elements of the floor, eliminating the dysfunctional partitions and establishing an end-to-end axis of the dwelling that provides continuity and unity throughout the space. This axis is not only a geometric gesture, it divides the house into two zones. The improvement in the entrance is completed with a careful choice of the materiality and the chromatic palette of the house, in contrast between the old and the modern, putting in value for the simplicity of the traditional architecture in Barcelona.

uploaded Ciutadella through Add A Home.
Add your own project for the chance to be featured in Editor’s Picks.