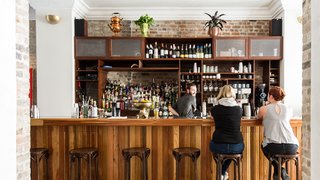 New Orleans rather famously has some neighborhoods that are full of character and personality — but for the most part, the central business district isn’t one of them. Which is why it’s remarkable that the Catahoula Hotel makes its home here. Tucked into the shadows of the office buildings, on a quiet side street, a pair of 19th-century buildings have been restored and renovated, turned into a 35-room boutique hotel with a distinctly residential flavor and a well-worn, lived-in style.

The rooms are compact and cozy, closer to the pub-room or B&B end of things than to a traditional luxury hotel, though they’re not at all short on comfort — soft touches like Casper mattresses and walk-in rain showers complement the rough textures of exposed brick and plaster. At the large end they feel a bit like self-contained studio apartments — and at no point do they feel like ordinary, cookie-cutter hotel rooms.

And the rooms, as impressive as they are, are only half the point. Piscobar is just what it sounds like — a Peruvian-flavored cocktail bar — while the similarly straightforward Rooftop Bar gets you out under the open sky. And the Catahoula’s coffee shop serves an exacting cup of coffee from PT’s, a Kansas City roaster whose modern flavors belie its two decades in the business.