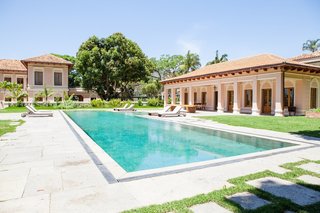 When we think of hotels in Rio de Janeiro we think of towering luxury hotels on Copacabana and Ipanema. But in this sprawling city there’s a wealth of alternatives to be found a little farther from the beaten track. At the foot of Corcovado, the peak famous for its statue of Christ the Redeemer, is a 19th-century mansion that was renovated in 2014 and transformed into a truly one-of-a-kind hotel.

It’s the sister hotel to the Casa Marques Santa Teresa, and if you’ve been there, you’ve got some idea of the type: genteel atmosphere, classic elegance, plus stylish, minimalist, modernist-influenced suites. Here they all open onto terraces with views of the pool, the garden, Guanabara Bay and/or Corcovado. And despite the decidedly urban location, you’ll benefit from an atmosphere that’s surprisingly tranquil and arboreal.

Jardim Botanico refers to the neighborhood, and also to the neighboring botanical gardens, which are most definitely worth seeing. But Casa Marques Jardim Botanico is no slouch in the garden department either. The estate’s garden and pool were designed by the office of Roberto Burle Marx, a famous Brazilian landscape designer, whose work here gives Casa Marques much of its pastoral charm.