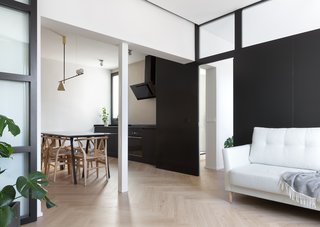 Casa 1723C is a refurbishment project of an existing 80 m2 home in Madrid. Consisting of a hierarchical structural-scheme, originally the flat had a classical interior distribution: two bedrooms at the façade facing the morning sun, a secondary bedroom, one bathroom, a narrow kitchen set aside within the living spaces and at the center, a living room. In contrast, the new young homeowners visualized their first home with an opposite scheme: a versatile and social place where they can meet their guests and friends.
This versatile condition becomes the main architectural parameter to face the project. The new scheme originates from a public central space around which the home’s most intimate living spaces are positioned. An open-space leads the way for furniture, plants and objects to define its use. In addition, two glassed sliding doors define the space into both original spaces. Lacquered wooden panels draw a black stripe that emphasizes the unity and singularity of this living area. Visually, it’s a powerful architectural element which serves and activates this central space, integrating the new kitchen and access to the main bedroom.
Facing the black stripe, an oak lined cabinet offers more room for storage and complements the kitchen to appear unrecognizable in its most classical conception. Having a public central space allows cross ventilation in summer, the user experiments a direct connection of the street with the community patio, and natural light flows from one space to another.
Intimate rooms enclose the main open space living area, and are independent of each other: at one end, the main bedroom with its private bathroom is visually connected through upper glass interior windows, and at the other end, near the entrance, a guest bathroom and an adaptable room which can be used as a study or guest bedroom, complete the home programmatic scheme. Light-toned oak floorboards are placed in V shaped all over the flat and together with the furniture’s neutral aspect, the singularity of the black stripe is enhanced, contributing to a central space with infinite social possibilities.

uploaded Casa 1723C through Add A Home.
Add your own project for the chance to be featured in Editor’s Picks.