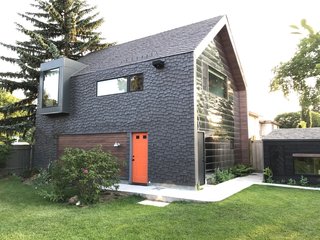 One would think if any home would be easy to find, this would be the one.

With mirror-like polished steel siding on one side of the house and striking dark hemp staggered shingles on another, this Edmonton laneway home is both dramatic and inviting, seducing you as soon as you cast your eyes on it. But even armed with the address and a picture of this Calder home, and even though it is imaginatively different than its neighbours, it’s almost impossible to locate.

Being a laneway home helps it camouflage into the surrounding community, as one would typically expect address numbers to go up or down in Edmonton, rather than drawing you into the lane between city blocks. The laneway home, a new concept in Edmonton. In addition, the homeowners intentionally built the house so it would integrate with the neighbourhood’s historical context, including the designated Coates Residence on the same property.

The interior grabs your attention. Done in a modern rustic style, the small 650 sq ft space feels much larger due to the vaulted ceilings. Wood beams — which are structural in addition to being a decorative element — add to the warmth. Picturesque views to neighboring historic property adds to playful design of the home.

uploaded Calder Laneway House - Edmonton through Add A Home.
Add your own project for the chance to be featured in Editor’s Picks.