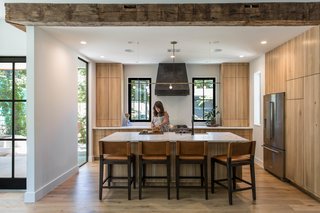 Located on a narrow site in the sought after Bouldin Creek neighborhood, this modern farmhouse creates a link between the existing residential typology and the modern homes currently being developed throughout the area. There is a careful consideration of proportion throughout the home – the Golden Ratio was used to create harmony between the spaces of the home and its surrounding neighbors.
The client, a young and aspiring interior decorator, reached out to co(X)ist to work collaboratively to make her first home a reality. Although stylistically different from other projects they had completed, the architects were successful in uniting the modern and the traditional to create a unique aesthetic. The use of reclaimed beams, doors and sinks in conjunction with new materials throughout the home visually marries the old and the new. The open floor plan of the ground floor unifies the public living spaces, providing visual connections between the kitchen, living, and dining spaces. The rooms on the second floor are more traditionally compartmentalized to create the necessary private spaces. The Master Suite is separated from the other 2 bedrooms by a family room which allows the secondary bedrooms to have their own ‘wing’ and creates privacy for all of the bedrooms.
There is an intentional strong visual connection between inside and outside in this home. The main living space is expanded into the outdoors through a large sunroom and wood deck that extends the length of the house. The kitchen is situated to provide visual connections to the public activities of the home, as well as views to the outside. Upstairs, the family room’s large windows let in abundant light, while the vaulted ceiling with an exposed ridge beam provides an added level of interior visual interest.

coxist studio uploaded Bouldin Creek House through Add A Home.
Add your own project for the chance to be featured in Editor’s Picks.