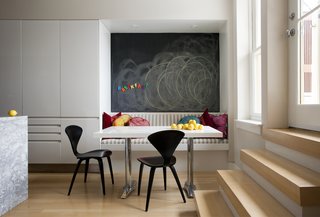 The owners of this historic townhouse on Beacon Hill, overlooking the Public Garden, decided that previous renovations were more suited to the husband’s bachelor days than to the realities of their current life, especially with their first child on the way. As a result, Ruhl Walker Architects was commissioned to redesign the entire 6 story townhouse.

The first step was to consolidate the house into a single home rather than the owner’s duplex unit and three additional single-floor apartments. In the new configuration, there is a small studio apartment on the lowest level, a storefront business on the street level, and four floors of living space for the growing family. The upper four floors are composed of parlor level entertaining spaces including a catering kitchen, a family living level with full kitchen and roof deck, a floor for the parents including shared home office, and a top floor with two bedrooms for children plus a nanny’s room.

The parlor level rooms were restored to their original grandeur, with a mix of antiques and crisp contemporary furniture in sharp relief against the thick original wood moldings, marble fireplace surrounds and gilt mirrors. In the foyer, high gloss grass-green paint sharpens traditionally-detailed paneling, injecting a considered modernism into the period rooms. Upstairs, both the family living level and the parents’ level were demolished down to structure and completely rebuilt and refinished with a sleek and minimal finishes. The living level revolves around a 24’ long kitchen island with an open living space facing Boston Common and a dining space on the opposite end connected to the roof deck. Up a flight of stairs, the adults reign over an entire story, with spaces for work, sleeping, and bathing flowing seamlessly. A large, freestanding shower divides the sleeping area from the otherwise open vanity and tub areas. Clear glazing at the top of the shower allows daylight to penetrate deep into the space. The toilet is hidden behind a frosted glass wall for privacy. On the top floor, the children’s rooms received new finishes but maintained the original layout, including a loft with hidden compartment that purportedly had once been used in the Underground Railroad.

Walker Architects uploaded Boston Common House through Add A Home.
Add your own project for the chance to be featured in Editor’s Picks.