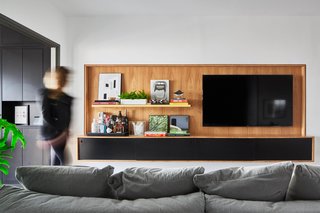 The young couple from São Paulo desired to live in a sophisticated apartment that would meet their functional needs, taking into account all members of the family; that is themselves as well as their cats.

Instead of integrating the large balcony to the interior of the apartment, it was decided to keep it in its original size, something unusual in the present days, but that proved of great importance for the day-to-day operation.

The integration of the environment and the versatility of the furniture became extremely important in this project considering the fact that there would be less indoor space.

Opening the kitchen to the living room seemed to be an obvious idea, however there had to be the possibility of closing it again. The problem was solved with sliding panels that are hidden inside the walls of the toilet and the service area, allowing complete opening and closing of the kitchen.

Following the same line of thought, the second dormitory was fragmented to house a bookcase which is used as an office and bar, as well as a futon that supports the office. At the same time, this room comfortably accommodates the couple´s usual guests and when this is the case, privacy is guaranteed by a thick curtain which can be fully retracted and closed, preserving it from the cats.

The couple did not desire to have a traditional dining room so this was replaced by the kitchen counter, located behind the sofa. There is a table on the terrace that can be used in three heights, adapting to different occasions, such as dinners, barbecues and happy hours. It can also be used as a decorative object on the external wall, freeing up space and making its use more flexible.

The sophistication of this project relies on the furniture and the intensive use of black and white, contrasted only by the wooden shelf.

uploaded Bon Apartment through Add A Home.
Add your own project for the chance to be featured in Editor’s Picks.