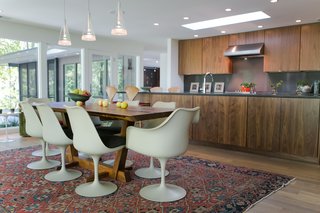 An Indianapolis couple, with a rich passion in their blood for mid-century modern homes, left a letter in the mailbox of a 1956 home a handful of years ago that they deeply admired, expressing their interest in the property to the existing homeowner. While the mid-century modern home that was designed by architect, Bill Wright, of Vonnegut, Wright and Porteous, was mostly original with only minor renovations completed in 1967, it was a diamond in the rough in the eyes of the interested couple. A few years later, the call and opportunity arose for this couple to purchase the property. After pulling in the best of the best in their respective trades to take a look at the property, it was decided that the home was a complete remodel, only leaving the original brick fireplace wall. Other than that, the home was stripped to the studs considering the number of years that had gone by with little-to-no upkeep. Woodpecker and insect damage warranted a completely new facade, and interior built-ins that were designed during the inception of the 1956 home proved to be too outdated, so the design team went to work to create the home of this couple’s dreams.

Mod Abode by Jamie Sangar uploaded Blakely Mid-Century Modern through Add A Home.
Add your own project for the chance to be featured in Editor’s Picks.