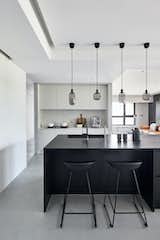 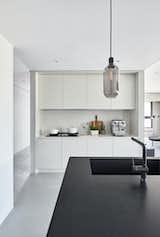 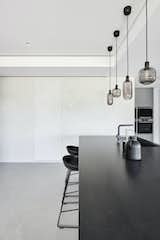 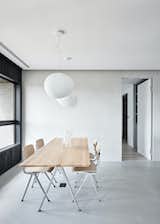 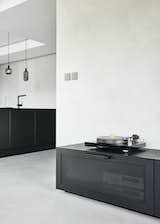 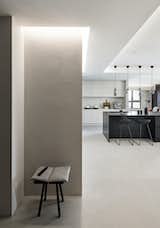 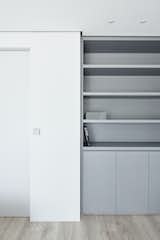 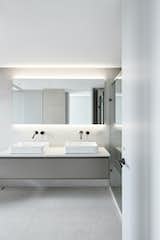 Taiwanese architecture studio CTT Architects designed this interior project for a doctor in Taipei City. The apartment is located on the 21st floor of the residential tower nestled in the mountains surrounding the Taipei Basin.

The design concept places emphasis on the connection to the surrounding vistas. In contrast with the original layout, the living area has been rearranged such that one can enjoy the amazing urban night views whilst introducing the external greenery inside during the day. We have also tailored the layout to meet the requirements of the client’s modern life. Following a busy day at work, he can completely unwind in the living room in the midst of the mesmerising urban night views; and be awoken by the dappled morning sunlight reflecting off the surrounding green mountains. We believed that every aspect of an interior design requires a bespoke response to its own contextual surrounding as well as to the individual needs of the occupants.

The different spatial functions such as bedroom and bathroom are seen as different grey units in the public space. However, homely styling is found inside the master bedroom. Wooden finishings are used to complement subtle light grey walls allowing the stunning views to be the main element - lush green mountain landscapes. At the entrance to the apartment, the simple grey wall with a small bench gives an air of simplicity in complete contrast with the mountain views seen through the expanse of the three window units, which speak for themselves. In the kitchen and dining area, the open plan provides ample space that can be adapted flexibly to suit the changing needs of the modern city dweller.

In terms of material selection, fine textured black charred timber panels are deliberately chosen to frame the surrounding mountain and city views. The design strategy is to use the black charred wall to contrast with the green and sky during the day; at night, the blackened panels blend seamlessly into the night view. The custom-made black island comes with black taps to contrast with the white kitchen joinery behind.

When it comes to detailing, our approach is to delineate different architectural elements through shadow gaps. For example the walls and ceilings are detached using shadows gaps which are also accentuated by indirect lighting after sunset. Every architectural element has been detached including the ceiling, beams, and walls to showcase themselves as individual elements and avoiding detractive decorations.