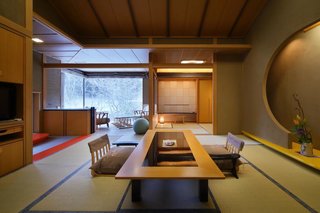 Just a few years ago a trip to a ryokan almost certainly meant a trip back in time — architectural time, at least — as the traditional ways of hospitality went hand in hand with traditional ways of building. Bettei Senjyuan, by contrast, is obviously of a more recent vintage, and it’s proof that contemporary design need not clash with the ryokan’s timeless charms.

Exhibit A is the long, arcing main corridor, with the rooms on one side and an unbroken, double-height window running along the other side. If you’ve been to an aquarium with an underwater viewing tunnel then you know the idea: complete immersion, though sharks, thankfully, are replaced by lush greenery.

Once in the rooms, however, you’ll find relatively little in the way of design innovation. The tatami-style Japanese rooms, with their floor-level furniture, are perfect just as they are — which is, of course, just as they’ve always been. Western-style rooms take some aesthetic cues from the tatami rooms, though in a more vertical orientation, and the Japanese-Western rooms, naturally, split the difference.

The point isn’t necessarily the rooms, however. You’re here for forest views framed through well-placed windows, and for the baths. Minakami is an onsen town, and Bettei Senjyuan’s baths offer the archetypal experience, all of them with two walls (or more) open to the surrounding greenery. Nearby Mt. Tanigawa-dake is capped with snow year-round, and its environs are the perfect setting for some mountain-based sports, from hiking to rafting to skiing.