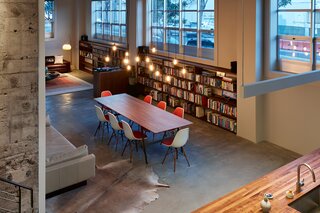 “Ice houses” were common in turn of the century San Francisco. Ice was harvested from lakes in The Sierra Nevada in winter and trucked to “cold” facilities in The City to provide an early form of refrigeration for the burgeoning metropolis. These structures were made of concrete, cast and layered with cork and bitumen to provide an insulated and water resistant shell. Into this historic envelope, we were commissioned to create a contemporary living space. The primary challenge was the depth of the floor plate and extremely limited amounts of natural light and air. The primary opportunity was the archaeology, the dis-assembly of the structure and discovery of concealed surfaces and material textures that informed our design.

For this project we designed, primarily, by removing. The building had been converted to “lofts” in the late nineteen nineties, but the ground floor had been used as a commercial space. Converting this level for habitation, our strategy was to expose the historical structure and to celebrate the industrial architecture. Flooring and wall coverings were removed to reveal sublime textures and monumental, concrete columns. These were integrated into the space planning and (literally) highlighted as focal points in key areas.

This is particularly true in the master suite, a windowless cavern that benefits from up-lighting on the wall surface to create a sense of interest and expanse. This area is so deeply buried in the floor plan that fresh air had to be supplied mechanically. IN spite of this, the master bath is an open “airy” space that includes the specialty, illuminated walls and in a generous area that is rarely afforded in the City.

In the long, passage leading to the master suite, glass block walls borrow limited natural light from the garage that is enhanced with interior flood-lights to mimic daylight and create a sense of place for the bedroom and den. The guest room is defined by corner sliding doors that open the box to accept light from the street and break down the rectilinear form.

The main living volume, two stories tall, was the easiest to envision. Stripping sheetrock we revealed sixteen foot tall, roughly formed, concrete columns and allowed their mass and rhythm to define the space. The kitchen sits, alter-like, at the south end of this space, bright blue and beckoning as a point of focus and inhabitation. All told, we have created an integrated series of spaces that are warm and comfortable in this once cold environment.

Levy Art + Architecture uploaded Bernice Place through Add A Home.
Add your own project for the chance to be featured in Editor’s Picks.