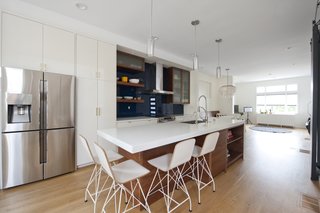 Like many San Francisco Bay Area couples who have outgrown their modest homes after having children yet cannot afford to trade up in a sky-high housing market, this Berkeley couple decided to transform their 952 square foot bungalow, on a narrow 2500 square foot lot (25 feet wide by 100 feet long), by lifting their existing house to form a second story and building a new first story underneath.

The original house, built in 1908, did not meet current setback regulations. New construction atop the existing house (without a lift) would have meant narrowing the house even more or no windows along the sides of the second floor, making bedrooms impossible.

By lifting the existing house so that it became the second floor, the owners could keep the existing windows, allowing all the bedrooms to be upstairs. Downstairs, the open floor plan and half bath tucked underneath the stairwell left no square footage unused, serving as an entertainment area. The addition of a floor-to-ceiling NanaWall system at the back of the house brings the outside in, creating an abundant light source from one end of the house to the other, despite having no windows on the sides of the first story. A floating stairwell wrapping underneath an existing skylight provides another flood of light from top to bottom.

uploaded Berkeley Bungalow Lift through Add A Home.
Add your own project for the chance to be featured in Editor’s Picks.

Front of the house

Half bath under stairwell

Half bath under stairwell