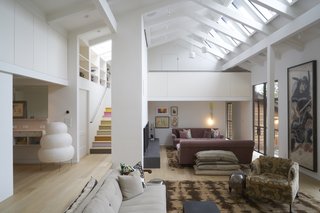 The San Francisco Bay Area is magnetic for many reasons, not the least of which is its natural beauty. After moving back to the United States from Jakarta, Indonesia, an architect-turned-artist and her husband found themselves searching for a homestead along the foggy coast of Northern California. She wanted remoteness and space, a creative retreat where the couple and their two children could relax and reflect—where community would be encouraged, but privacy also valued. After a challenging hunt, they found a 21-acre property north of San Francisco with a garage and stable that overlooked bucolic views of a hillside, meadow, creek, and trees. Built in the 1970s by co-authors of Christopher Alexander’s A Pattern Language, the dwelling expressed architectural intention—but it also needed work. “It mattered to us to honor the sense of place,” says the homeowner. “We loved the process.”

The couple assembled a local team to help renovate the house: general contractor Pete Humphrey, carpenter Cemil Hope of Hopebuilt, and landscaper Rufus Blunk. Paul Discoe, a builder and Zen Buddhist teacher, worked on the stable, where the homeowners stayed during construction. They opened up the building to capture more light and views, moved a stairwell to redirect foot traffic that was disrupting the living room, and removed electric heating panels on the ceiling for more energy-efficient solutions. At every turn, the project preserved private sanctuaries while emphasizing communal space. “We solved the incredible darkness of the nighttime and the way things can feel really remote,” says the homeowner. “I thought, ‘How do I make people feel safe and looked after, warm and welcome? It’s not just a physical sensation; it’s an emotional sensation, and that was the design intention.”

Named Beetlebung at Treecloud Creek, the serenity of the home responds to the surrounding wilderness—the innumerable stars visible at night and the deer, coyotes, and mountain lions that pass through the meadow. “You have a different relationship with your body,” says the homeowner of the home’s seclusion. “It’s a different spiritual place. That’s how I experienced it, and I wanted you to be able to have that and be basically outside. The whole hillside is your living room.”

Playful panels of color on closet doors and the stair risers break up the white walls. The homeowner explains, “I took as inspiration Imi Knoebel, whose work I had seen at the Dia Beacon, and who works with large shapes of color placed in relationship to one another.”

The living room features furniture from BDDW. Much of art arrayed throughout the home was collected through auctions; Southern Exposure and The Luggage Gallery are two favorite sources.

The home offers places for solitude and quiet. “Each bedroom was thought of as a separate building,” says the homeowner. “Each bathroom had an outdoor component.” Here, an outdoor shower is a private connection to the outdoors.

A pendant by Doug Johnston, represented by Patrick Parrish, hangs over a custom dining table by Christopher Kurtz. “Working with [Kurtz] was a privilege and beautiful experience,” says the homeowner. “He sent us a video of a stream with eddies in it, and I thought that was so appropriate: you look out at the meadow and the forest, and the lights are kind of like mountains.” The oval shape encourages everyone sitting around it to engage in one conversation.

The homeowner took additional inspiration from Norwegian Wood: The Thoughtful Architecture of Wenche Selmer by Elisabeth Tostrup, which she started reading early in the process, and the fabric of Josef Frank.

Part of what drew the homeowners to the house was its quality redwood construction. An outdoor deck provides an intermediary space that connects the interior to acres of open meadow.