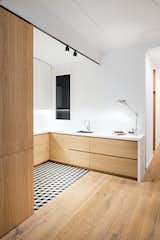 Apartamento Alan is a minimalist interior located in Barcelona, Spain, designed by EO arquitectura. Originally, the apartment presented a decayed and dark image due to the excessive subdivided rooms. The patio is very narrow and it scarcely receives light. Except for the two rooms next to the main facade, the apartment was barely illuminated by natural light. The main objective has been to achieve the maximum use of natural light in the apartment. The architects simplified the distribution to obtain large and opened spaces that multiplied light. The outcome is a linear succession of three big spaces of different proportions associated with the structure of load-bearing walls. Each space has a specific use with its own identity (living room/kitchen-dining room/bedroom) and the openings between them allow them greater freedom of relationship. The only partitions that are not demolished are those in the hallway, which generate the servant spaces for the apartment annexed to the patio.

Leibal uploaded Apartamento Alan through Add A Home.
Add your own project for the chance to be featured in Editor’s Picks.