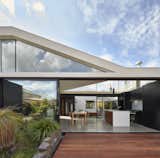 A 1,500-square-foot home in Melbourne welcomes a modern black and white kitchen, dining, and living area.

When the owners of a property in Melbourne’s Hawthorn suburb approached director Michael Ong of MODO about a possible project, they presented a straightforward order. They liked the Edwardian features at the front of their home, but they were frustrated with the dark living room and awkward kitchen toward the back. They asked Ong, simply, to change it. Ong agreed that the house’s initial “charming” qualities gave way to a mismatched '80s renovation, but he wanted to replace it with a structure unique to their personalities. The couple spent a lot of time outdoors with their dog and cat, and they planned to plant vegetables alongside the verdant native species already growing in their garden. This was the detail Ong used to add dimension to the couple’s wishes, and he set out to create a modern addition that focused on the outdoors—all while complementing the Edwardian aesthetic everyone agreed to keep. “So often I see extensions that try to blend the new works with the old house, and more often than not, the ‘blending’ creates a confused architectural outcome that diminishes the value of both,” he says. “If we look at creating a contrast, we can address the different styles of architecture separately.” The distinctions between the old and the new, the front and the back, are what give the residence its unusual beauty.

Kelly Dawson uploaded Breeze through Add A Home.
Add your own project for the chance to be featured in Editor’s Picks.

“From the beginning we knew we needed to remove the rear 80s extension and preserve the front Edwardian home,” architect Michael Ong says. “So, we were interested in how the two different architectural styles would work together.” The old Edwardian home can be seen in the center of the frame, through the dining room and kitchen of the addition. Merbau Decking extends into the garden, which became the focal point of the home.

A range by Falcon stands in the kitchen; Apollo pendants by Masson for Light hang above the island. Polished concrete flooring acts as a uniting tone between the room's black and white surfaces.

“We kept the tones very neutral because we wanted the colors of the garden to come through,” Ong says. “Light also plays an important role here, and again the neutral tones help highlight the changes in the light and sky.” Ong’s team used Melbourne's Ajar Furniture and Design store to supply the home's furnishings, and this Marcel Breuer Club Chair Model B3 sits off the dining room.

“Natural light was not great in this house,” Ong says. “So it was important that we came up with a concept that allowed natural light to flow through the new extension and also to the existing front part of the house.”

“The new living area is now nestled between the rear garden and the new courtyard,” Ong says. “We felt this approach not only respected [the clients’] interests and lifestyle, but we hope it will enhance it.” Aluminum-framed windows and doors by Capral allow the owners to bring the outside in.

Ong refers to the open space between the old and new structures as “the void,” and he says it's meant “to enhance the ‘pavilion’ concept" of the dwelling. Four sets of sliding glass doors surround the space.

An Envy II Wall-Faced Suite toilet by Parisi sits in the home’s sole bathroom and Caroma’s Starlett 1850 Island Bath was installed next to the window.

“Instead of extending the new living area from the existing house, we decided to build a stand-alone structure off the front house and connect the two spaces with a central passageway,” Ong says. This made the back of the home distinctive from the Edwardian front. Recyled brick was used to create the connecting hallway.