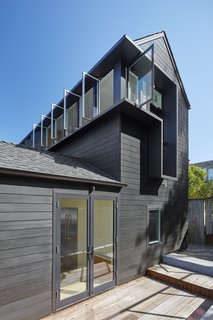 A modest home expands through aggregation, multiplying scaled versions of the original A-type pulled along a twisted Z axis. The result is a double offset – a 2nd story structure to capture sweeping views and a voided landscape carved into the hillside. New forms combine with the old, erasing boundaries.

The A-to-Z House proposes an alternative to conventional approaches for expanding an outmoded San Francisco home. Perched on a hillside in Golden Gate Heights, a modest single story 1934 developer vernacular structure had limited space and failed to take advantage of expansive views of Sutro Tower, Golden Gate Park, Sausalito, and the Bay. But rather than replacing or merely attaching to the existing structure, the A-to-Z strategy seizes upon the existing forms – scaling, repeating, and manipulating found objects into a contextual collection of structures comprising a dynamic home immersed in its surroundings.

A new gabled roof structure is inserted at the ridgeline of the existing living room bar, stepping back from the street to reduce mass and nestling into the existing roof to establish a low horizon line. This datum is characterized by a ribbon of operable windows that wrap two corners of the building to take advantage of critical views, accented by to a sawtooth window system and thickened metal edge. Inside, variations of the floor level and ceiling height provide different ways to experience this horizon in each space, from sweeping vista to private lookout.

As the new gabled structure reaches the carefully terraced back yard, it twists and wraps down around the dining room. This turn along a torqued Z-shaped axis (alternately horizontal and vertical) is held ever so slightly apart from the existing house, using a band of light and the articulation of the ceiling to create meaningful difference out of similar forms.

Spiegel Aihara Workshop uploaded A-to-Z House through Add A Home.
Add your own project for the chance to be featured in Editor’s Picks.

Sunny Vantage Point with Views Over the Bay

Between two New and Old

Perched on a Corner

Bedroom through to the Den

Ribbon Window from the Den