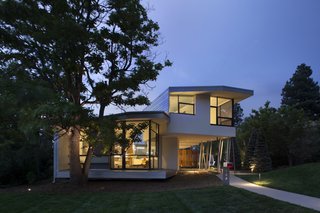 In nearly every parent’s life, there is a point of transition from raising children to becoming empty-nesters. In anticipation of that moment, Chris and Denise Hess first moved to Boulder, Colorado and then staked out a premier building site in the desirable Chautauqua neighborhood on which to realize their dream home. “It was a bit of a selfish endeavor,” admits Chris, creative director and founder of Mondo Robot, a Boulder-based digital agency. “But we felt it’s our time to do what we want and we no longer need all the practical elements of a house.”

With jaw-dropping views of the famed Flatiron rock formations and a luxurious southern exposure, the site had extraordinary potential. But there were challenges. Between the time the couple purchased the land and when they were ready to build, the City of Boulder ratcheted up its zoning restrictions which limited the site’s buildable envelope to a narrow slice.

To unravel the regulations, the couple enlisted Boulder-based Arch11, a design firm known for its exceptional ability to manipulate impossible sites. The architects responded to their client’s request to fully optimize the site’s conspicuous qualities while artfully maximizing the homes livable space.
“We were up against limitations in every direction,” notes Arch11 principal, E.J. Meade “but started with a diagram of two stacked boxes that we sculpted by modeling solar shadows.” By overlapping form and space, the house folds― like origami, into dynamic, sun-lit interior space― and unfolds to capture views and define outdoor rooms.

Arch11's design for the 3,000-square-foot home with three bedrooms and four baths, splits the program into two building volumes, placing “private” elements in a second “box” that is offset and twisted above the first floor living and entertaining space. This upper floor is elevated above the ground plane and supported on a forest of thin columns―elegant like Corbusier’s pilotis and irregular like a game of scattered pick-up-sticks.

Both the interior and exterior material palettes are spare, with little artwork to disrupt the serenity of the space. As the homeowners explain, “The Flatirons and their changing moods become the art on the wall.”

Arch11 uploaded 6th Street through Add A Home.
Add your own project for the chance to be featured in Editor’s Picks.

Arch11-designed home at the base of Chautauqua Park in Boulder, CO

An array of columns partially support the second floor

Minimalist design with views to every corner of the house. Vitra Hal stools in the kitchen from Design Within Reach

View from living room to kitchen