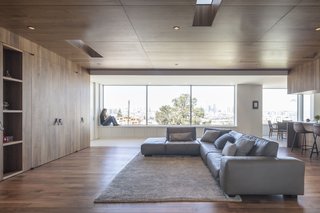 Sidell Pakravan Architects has renovated an apartment in San Francisco’s Potrero Hill by contrasting a set of distinct wood volumes against the dominant horizontal planes of existing low ceiling heights and making use of an unused roof to capture outdoor space within the city.

The volumes, clad in walnut, establish a warm visual language that continues from the main floor through to a new penthouse. One volume controls vertical movement through the space, while a second defines the main living area and breaks through the ceiling to create a large interior room on the roof. The reading of the two volumes registers as a material difference between the insertions and the surrounding perimeter. A deep built-in bookcase on one edge and a solid wood island on the other edge emphasizes the volumes’ figural, rather than planar, quality.

A direct visual relationship with the city is embraced in the project by orienting the volumes parallel to San Francisco’s skyline, increasing aperture sizes, and removing dated ornamentation from the roof. Views framed on the main level by the wood figure transform into an open view on the penthouse as a large aperture opens completely to dissolve the relationship between interior and exterior.

Celebrating elevated outdoor living and a direct visual relationship with the urban environment, the project has been selected to be showcased as part of AIA San Francisco’s Architecture and the City Festival. This year’s theme is “Future City”, celebrating innovative and imaginative visions for San Francisco.

uploaded 19th Street through Add A Home.
Add your own project for the chance to be featured in Editor’s Picks.