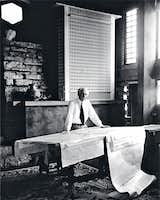 “When I set up this shot of Wright in his studio at Taliesin, he hadn’t shaved that morning and told me he wasn’t about to. So I had to move the camera back to conceal the stubble, which actually improved the shot.” Behind Wright is a model of the San Francisco Call building, a favorite of his that was never built.

A full-scale model of a Usonian house, installed on the site of the future Guggenheim Museum, 1953. 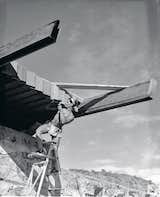 Alfie Bush was one of the many young apprentices who helped build “the Camp,” as Taliesin West was then called. Here he’s shown working on the dining hall.

Architect John Black Lee’s Day House, in New Canaan, Connecticut, 1966. “After Calder built a new studio and home near Sache, France, he sent me a postcard that read: ‘We have a new shack. We’ll be seeing you.’I took it as an invitation and went to visit in 1964." 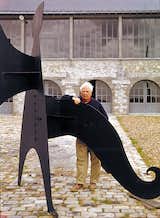