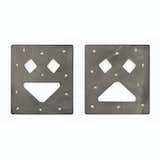 Sullivan explored anthropomorphism with his nickel-plated steel masks. "I am fond of saying that, 'there is no such thing as a human,'" he explains. "'Human' is literally just a word—a placeholder for whatever we actually are." 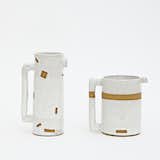 Ben Medansky "As a kid, I would constantly play with silly putty to construct small abstract sculptures," Ben Medansky says. "I’ve always loved connecting with the earthy material of clay and been interested in making objects with my hands." Early explorations eventually led Medansky to study ceramics in high school and college; today he works from his L.A. studio creating functional pieces inspired by abstract forms. 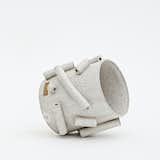 The Vessels Medansky displayed were thrown on a wheel. He then applied more clay to the outside to create the 3-D surface textures. "I usually start by throwing a cylinder and adding or subtracting forms from there," he says. "Most of my pieces are inspired by certain movements and references found in modern art and architecture, such as Le Corbusier’s Notre Dame du Haut in Ronchamp, France. When glazing the objects, I like to use a satin white speckled glaze because it’s a color I see it fitting into domestic and exhibition spaces." 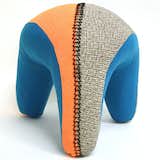 Tanya Aguiñiga Tanya Aguiñiga created the Chiapas stool after working with Mayan weavers in Mexico. "The women create beautiful animals out of hand woven fabrics," Aguiñiga says. "These stools are inspired by the animals and are hand-woven fabric with a wool felt bottom." 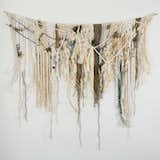 Crafts have become a powerful communication tool for Aguiñiga: "Having grown up in a place where trash is often used to construct houses, craft has provided me an outlet to create something that is functional while translating emotions into a three dimensional object," she says. 'The art objects I create were not merely aesthetic, but can be used on a daily basis as well, connecting me to a long tradition of artisans worldwide—which is how I began my craft education and career."