From the start of the project, a tangible connection to the rear garden was at the top of the clients’ wish list. This fluid transition from the living room is enhanced by ceiling height steel framed double-glazed sliders. Clerestory windows bring additional light in, and enhance the feeling of openness.

The white cement front facade was left unchanged due to heritage restrictions. From the front of the home, the new burnt ash wall at the entry is the only hint that a modern wing lies behind the unassuming exterior. 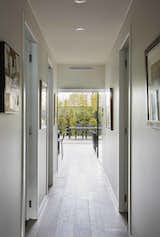 Upon entering, there is an uninterrupted line of sight to the lush backyard. One of the details the team agonized over was the path from the entry to the rear living space and garden. Says Jost Architects principal Patrick Jost, the team gave “special attention to getting from the front door to the rear living area and reviewing and investigating every combination of layout to achieve the best result.” This was done through collaborative planning with the clients, who volunteered ideas and sketches along the way. 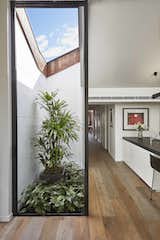 An internal courtyard punctuates the main floor of this renovated home near Melbourne, Australia, and adds a practical source of light and air. The local climate patterns were taken into account during the home’s design and layout. Because temperatures can vary quite dramatically, solar control was very important. The large glazed sliders to the east, where the home gets morning sun, strategically contrast with the less extensive glazing to the north. 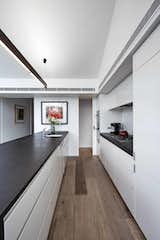 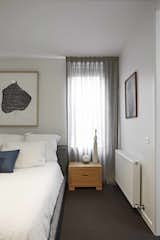 The new, enlarged master bedroom is positioned where the old dining room once was. The clients wished to add an ensuite bathroom and walk-in closet. Throughout the design process, there was push and pull with reconciling the programmatic goals with a finite space. “Getting everything the clients needed into a pretty small was achieved through massaging small dimensions from one end of the house to the other,” says Jost. 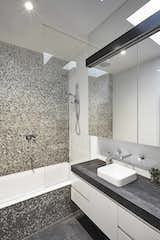