Community Bench Designed by: Lello Design Initially inspired by a competition for seating with a "shack chic flavour," Aram Lello conceived of a bench system that would work in urban communities as well as in a suburban garden or a gallery. "I give a guide, and then you decide how to use it and how to change it," he says. More info: aramlello.com

Kudu head Designed by: Joanna Orr What do you get for the trophy hunter who already has an elephant foot coffee table, trophy heads aplenty, and skins everywhere? Joanna Orr, a vegetarian, decided to make her friend a kudu head constructed with interlocking pieces of Xanita, a recycled corrugated cardboard. Several species are now available, though some of them are in leather, leaving you to decide which material is most ironic. More info: headondesign.co.za

Ukhamba Pot Designed by: Mrs. Shongwe Sticking with the customary practices in rural KwaZulu-Natal, Mrs. Shongwe collects her own river clay and uses a pit fire. The traditional shape is rendered contemporary with small knobs for texture. More info: khumbulani.co.za 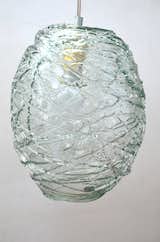 Bird Range Designed by: Imiso Ceramics and Ngwenya Glass Sculptor Andile Dyalvane traveled to Swaziland last year to study with master glass worker Sibusiso Mhlanga. A series of collaborations has ensued--some complementary, such as bird-nest lamps in either clay or glass, and some integrated, such as a glass chandelier with ceramic thorns and pots with a glass base and ceramic top. More info: imisoceramics.co.za and ngwenyaglass.co.sz 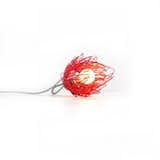 Protea Pendant Lamp Designed by: Nikki Drzewicki Nikki Drzewicki trained as an architect back in the day when one sketched by hand rather than computer--she says she still works on paper first--and these wire lamps look much like her drawings. More info: indaloproject.co.za Don't miss a word of Dwell! Download our FREE app from iTunes, friend us on Facebook, or follow us on Twitter!