With the deliberate exception of its glass wall, the addition blends in seamlessly with the existing Victorian home. Its bricks were repurposed from the demolition process as were the windows for the upper level’s new bedroom.

In addition to blurring the line between house and garden, the extension’s frameless glass wall fully surrounds the dining area. An antique Tibetan console contrasts with the dining area’s modern furnishings, providing a welcome touch of color and texture.

While the extension centers on the dining area, its ample openings bring light pouring into the rest of the house as well. The kitchen is the biggest beneficiary of this reconfiguration. Opening up directly onto the dining area, its crisp cabinetry and finishes are now bathed in light.

The dining area looks out directly at the garden with only a solitary hanging light interrupting sightlines. Eames fiberglass chairs surround the dining table. Pale finishes, including the wood flooring by Reclaimed Flooring Company, further augment the sense of airiness. 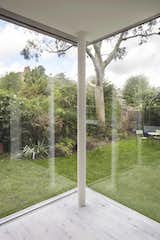 The dining room is accessible through custom timber and glass sliding doors. Thanks to a glass-to-glass joint in the corner, the extension appears to be supported by the glass itself. The elegantly slim structural column, which has been set back from the corner, only enhances this feeling of weightlessness.