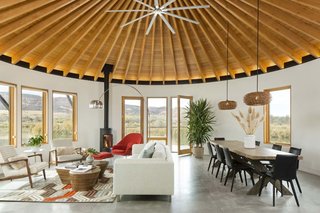 The owners wanted to build a series of yurt tents on the high desert plains in the western Colorado town of Fruita, but one look at the surrounding landscape and it became clear that nomadic notions would not hold up to nature's harsh elements. "The first time I visited the site, it was about 107 degrees outside. It felt like I was stepping into an oven," says architect Rick Dominick of Dominick Architects. "I was scanning the horizon and trying to find some shade," he continues. Dominick, much like the homeowners, was smitten with the idea of the round structures, but knew that they needed to design something new.

Finding a solution, however, turned out to be a challenge. Dominick spent two years researching concepts for the home. During this time, he was surprised he didn't find more architects who are embracing yurts, considering their recent spike in popularity. "There’s a built-in challenge with round buildings. That is, how do you connect anything to them? A round structure really wants to sit on its own. We designed and permitted another structure before we shifted gears and went in this direction," Dominick explains.

Ultimately, Dominick devised a modern structure connected to three yurt living spaces—each of the yurts being a different size. He worked with BecksBuilds to get the job done. The largest includes the living and dining spaces and is surrounded by windows with views of a private lake. The second yurt features the master bedroom in a more private setting at the back of the home, and has an outdoor shower just steps away from its patio doors. Finally, a third yurt is a bunk room for the children and is tucked back in a protected courtyard.

When it came to designing the hub of the home, Dominick said it had to house important parts of the home including the kitchen, bathroom, and the hallways that connect to the yurts. Dominick likens it to "a freestanding box within a barn," with an open airy feel that encourages wandering. A series of structural steel beams outlines the shape, while beams along the horizon separate the rustic beetle kill pine panels from the sleek white walls below.

The central pavilion also provides nearly all of the home's shade. Drawing on his initial experience at the site, Dominick decided to go large. "By taking the steps out a little further from the columns, it effectively expanded the deck, making it bigger without having to stretch the roof out." The patio measures 1,600 square feet and faces southwest, protecting the home from the worst of the sun. Dominick said he sunk the beams into the concrete for a seamless and bolt-free patio—sparing the homeowners the occasional stubbed toe.

The use of materials throughout the home—particularly concrete—helps maintain the temperature, as well as the homeowner’s laid-back lifestyle. "It's ideal for hosting many families at once," says the homeowner. "The focus is on outdoor living, and it's very low-maintenance, even with sand-covered kids and dogs traipsing through the house." Recently, the family hosted 35 people over a weekend on the property, which includes a number of campsites with electrical hookups and a massive barn.

In the end, everyone was delighted that they stuck to the round, yurt-inspired structures for parts of the house. "There's something very intimate about the round room," says the homeowner. "With windows surrounding the perimeter, it really allow you to feel more connected to the outside."

This home’s owners wanted to build a series of yurt tents on the high desert plains in the western Colorado town of Fruita, but one look at the surrounding landscape and it became clear that nomadic notions would not hold up to nature's harsh elements. “The first time I visited the site, it was about 107 degrees outside. It felt like I was stepping into an oven,” says architect Rick Dominick of Dominick Architects.

The largest of the three yurt structures houses the living and dining rooms and provides panoramic views. A geometric hide rug by Dedalo Rugs ties in pops of red from Eero Saarinen's Womb Chair, and pale blue from the Room and Board cushions on the sofa. The homeowners sourced the Oggetti Showtime coffee table from Wayfair. A pair of Kichler pendants define the dining area.

The central building connects the entry with the kitchen via long hallways. Concrete floors throughout the home—as well as the concrete center structure—keep the home cool in the summer and warm in the winter.

The ceiling of all three yurts is made with tongue-and-groove planks of Douglas fir that meet at a steel skylight at the center. A custom-made bed is complete with a linen duvet cover from Coyuchi and enticing sheepskin pillows.

The cathedral-shaped steel beams outline the open plan of the main house, which includes a kitchen, upstairs loft, bathrooms, and hallways that connect all of the yurt structures. The central structure is made of concrete and serves as a thermal mass to keep the home cool in summer and warm in winter.

As the saying goes, the kitchen is always where guests gather—but this kitchen also happens to connect the living room and entry to a large outdoor patio with views of the lake. Philips dome pendants hang above a sizable marble island encircled by Bertoia counter stools by Knoll.

"The central pavilion evolved as a place to house a lot of the functions of the home, and also gave us a structure to build porches and decks for further protection from the sun," says Dominick. The outdoor patio is 1,600 square feet.

The home is located in the town of Fruita, Colorado, which is popular for its varied and extensive mountain bike trails.