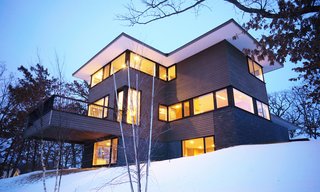 Challenging terrain and difficult access left this infill site forgotten for several years. In the hopes of discovering a buildable scenario where others had not, we initiated a research/design process before the land was purchased.

After extensive mapping of trees, topography, micro/macro climates, and soil conditions, a massing study revealed the possibility of an offset cruciform plan capable of weaving into the grove of mature oaks. To organize the plan, a central stair and four-sided fireplace act as the hinge upon which each wing of the house radiates. A central spine moves from garage at the site’s highest point, to an outdoor living room cantilevered over the lowest and steepest point.

Windows and doors are grouped into ribbons that span the joints between masses. Materials are intended to be haptic but edited, and details to be resolved by silent. The underlying desire was to create a home with its own nature, that contrasted with the natures of its context, but inherently belonged to it.

DO Architects uploaded Whispering Way through Add A Home.
Add your own project for the chance to be featured in Editor’s Picks.

Posted By
DO Architects
@doarchitects
Architect