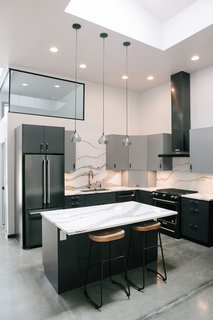 Waldron Designs owner, Rachel Waldron, met the owner of this 2,500 square foot, old hydroplane hangar at the Vashon Home Fair in 2017. She was a sprite, energetic woman with long silver hair worn in a ponytail. She told Waldron that she had a metal garage that she wanted to turn into her home. She was completely shocked when the firm was more than interested. She continued to say that she hoped Waldron would not be disappointed when she saw that it was just a garage. "So, I set my expectations low", said Waldron. "Boy, was I blown away to find that this was no ordinary garage, but the very hydroplane hangar where the Miss Thriftway** replica, a famous Pacific Northwest hydroplane was built". The hydroplane went on to win several races and more importantly, win the hearts of locals with it’s beautiful craftsmanship.

The garage had three bays, two of which had been finished to the extent of having drywall and some exposed plumbing and the third was what one would expect from a garage with exposed studs up against the exterior metal siding. When the designers first saw it, the hangar was being used as an oversized storage facility. But they were not without inspiration, energy, and excitement! The owner initially thought unusual finds from thrift stores and local road sales could be used to construct the space. She was not looking for anything “fancy”. While Waldron initially offered many options utilizing the items in the storage unit, the quality of these items could not stand to the level of potential the home had. This thrifty sprite found many wonderful ways to splurge on herself and learned that she more than deserved these luxuries!

*"The first Miss Thriftway measured 28½ feet, had an 11½ foot beam, weighed 4,500 pounds, and was originally powered by an Allison engine and later changed to a Rolls. She came within 4.536 seconds of winning in her first competition, the 1955 Gold Cup Race. Owned by the Thriftway Stores of Washington State, represented by Willard Rhodes, president, Miss Thriftway was designed by Ted Jones and built by Les Staudacher. She won the 1956 and 1957 Gold Cup Races, the 1956 President's Cup Race and she set the world's record for a 15-mile heat with a speed of 112.312 mph in the Governor's Cup Race. Her colors were mahogany, with orange and cream stripes and she flew the burgee of the Seattle Yacht Club. She was demolished in the 1957 Governor's Cup race."

uploaded Vashon Hangar Conversion through Add A Home.
Add your own project for the chance to be featured in Editor’s Picks.

The original siding of the garage was maintained where possible in the effort to keep costs down and to respect the original use of the building. Existing trimwork remained but received a fresh coat of paint. The garage door was relocated from the left side of the building and freshed up with paint to match the exterior siding.

In the original building, large double doors allowed hydroplanes to move in and out of the space. In keeping with this inspiration, Waldron Designs kept the double door entry with a light and airy transition space.

Ensuring that light could move freely throughout the space was a must. Oversized skylights were used as well as the separation of spaces with glass. In the evening, the interior walls of the skylights have lighting to permit light to always emanate from these spaces.

Original concrete floors were filled, and polished, allowing blemishes and wear to remain. The kitchen was designed to reflect the simplicity of island life, the dreamy nature of the owner's love for the coast and open fields, and the industrial origins of the home.

The rug shown in the foreground was one of the first items selected for the home. It suited the owner's energy with it's vivacious bright colors and was the perfect touch needed to soften a space that was so minimalistic.

The glass interior window allows light to penetrate into the laundry room and mirrors the clerestory window, creating the illusion of an additional window.

The high ceiling provided space for ample storage, and the original garage utilized this ceiling space with a shelf that ran the perimeter of the hangar. Waldron maintained this idea, bringing a residential twist by simply closing up the exposed shelving.

Inspired by the way light moves through abandoned buildings with their open simplicity, Waldron enhanced dark corners as well, embracing their unique shadows and mystery.

In spaces where skylights did not make sense, flush lighting fixtures were utilized to emulate daylight, offering a similar atmosphere to a skylight. This deep purple door was the original metal door for the hangar when this was all used as a garage.

As a pet-sitter, this homeowner uses this space out back to dry off the dogs before they run inside!

The original hangar- used at the time of this photo as a storage space.

No photos of the original space are available empty, but this image shows what a tremendous transformation took place.

The original double doors that inspired a light and tall entry space.