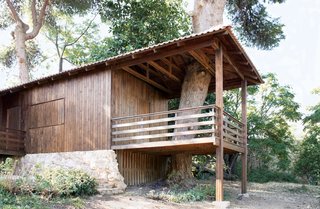 A prefabricated residence built of a recycled shipping container with integrated two trees.

The house is constructed among mature Jerusalem pine trees. Two of the trees have grown in the exact place where the house was to be located. The site was tight, and this led to the decision to integrate the two trees within the perimeter of the house. Preserving and rendering the mature trees as part of the house required attention and care. It was a daring decision that resulted in a house with a special ambiance.

The house, which now appears to have grown there, actually began as a recycled shipping container. It was constructed by applying prefabrication wherever possible, with all the interior finishes, insulation and structure completed off-site. It was brought to the site fully prepared to serve as a dwelling. The timber cladding, light roof over steel ceiling, stone work, and decks were designed in advance, and were complimented by works on site, after the house was inhabited.

The pines not only lend desirability to this unique house but also serve as a natural source of air-conditioning. Their shade also protects the timber from the harsh sun.

The pine trees were examined as part of the design process. Their continued growth is monitored and responded to, which results in a house that is a living structure.

Golany Architects uploaded Two-Tree House through Add A Home.
Add your own project for the chance to be featured in Editor’s Picks.