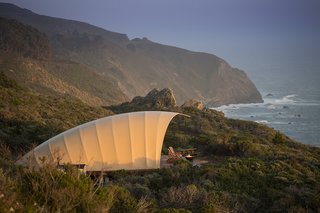 Designed with the help of Harry Gesner, the Autonomous Tent provides a luxurious camping experience in Big Sur, California.

When Phil Parr wrote a letter explaining to Harry Gesner, Malibu’s famed surfer-cum-architect, that he wanted to build a transportable, five-star boutique hotel, he wasn’t expecting an answer. Parr had worked in the software industry for 20 years and wanted to pursue a project that combined his passions of architecture, art, and nature. He had read an article about Gesner in Dwell some eight years prior. "I was blown away by it," says Parr. "I still have [the issue] and pull it out." To his surprise, Gesner called him the day he received the letter and said he’d love to be involved in the project. Not only was Parr about to fulfill his dream of meeting Gesner, but he would be collaborating with the iconic designer to bring his vision to life.

One of the tenets of Treebones Resort is to build shelters that perch lightly on the land. The Autonomous Tent doesn't require a foundation, instead resting on a deck that is held to the ground with screws.

The tent fabric guards against the torrential wind and rain that can sweep through Big Sur. Parr customized the entryway to maximize the view.

The tent fabric is similar to that used for the Denver International Airport and the San Diego Convention Center. For less temperate climates, Parr is researching translucent insulation.

The Autonomous Tent is available to book for $495 plus tax per night. To make a reservation, visit the Treebones Resort website.