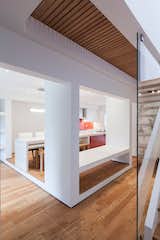 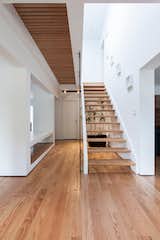 The project is located on the southern edge of Lansing, which is a small neighbourhood in the North York municipality in the Greater Toronto Area. Thorax House is a minimalist two-storey wood structure that carefully responds to the needs and lifestyle of the client while it has not forgotten the basic logic, plan and simplicity of the bungalow it replaced: the new project sits exactly on the small foot-print of the one-and-a-half storey bungalow that had occupied the site.

The evolution of design was a simple extraction form a thorax diagram: a two-party system on either sides of a core. Starting with the main circulation, the staircase and bridge (the spine) run up the middle of the square volume, and all the living spaces (lungs) are arranged symmetrically on both sides. One can consider the building structure and envelope as the ribs, muscles, and skin. The staircase and bridge, which sit on the central axis, divide the living room and gentleman banquette from the dining room and kitchen on the ground floor, and the master bedroom from the two guest bedrooms on the second floor.

On the main floor the dining area has been raised one step to keep the kitchen island and the dining table at the same height as one continuous surface. Although the staircase divides the house into two, one can still see the opposite side through carefully arranged sight-lines. An example would be sitting in the dining room and getting a glance at the beautiful slab of stone above the fireplace in the living room; this very unusual marble is the client’s personal touch.

On the second floor in the master bedroom, the sleeping quarter has been confined between the semi-open ensuite and the walk-in closet where one can overlook the sky-lit living room through a double height void washed with natural light and invaded by the tip of a twenty-five-year-old plant. The owner’s request for plenty of natural illumination and reasonable amount of privacy, has been satisfied by large windows overlooking the rear yard and three skylights: one above the bed in the master bedroom, one above the double height void, and finally one above the bridge where light penetrates through the bridge and creates surprising hachure that changes during the daytime.

Instead of making a visual splash, the exterior of this modest monolithic mass is rendered in grey stucco. Exceptions are two light-weight structures made of black aluminum as canopy and guard at the entry. The only accent is the red signage designed specifically for the house.