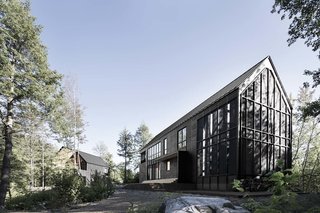 The “Les Marais” project begins with a fascination for the built landscape of the
empty space that characterizes North American rural areas, often consisting of
large flat expanses studded with groups of buildings. Apart from a stylistic interest
in these abandoned barns, which have often lost their original programmatic
aspect to become silhouettes “distorted” by the absence of use, they inspire
me with two perceptual problems. The first concerns the relativization of scale.
Difficult to define, the dimensions of these buildings, sometimes windowless
and isolated in a crop field, thus evokes an identity quality of our territory: a territory
of vast expanse often out of scale for the observer. The second problem
arises when these buildings are combined with others. Their often fortuitous
arrangement then creates voids that “draw” a sort of transition place between
the buildings and the space around them. I see in this the potential for a significant
place, an embryonic collective space. The value of this “pattern” thus does
not reside in its architectural form but in what it makes it possible to “see”.

Hence, for this project, we also designed an “iconic” contour of a certain proportion,
then multiplying it on various scales and meeting the vocation of the
program, which consists of an intergenerational complex. This reduction of architectural
expression to a single profile serves to reveal the void orchestrating
around the “limits” of the whole. The specificity of the place therefore plays a
central role in determining the arrangement of the three “icons” in the space.
A “collective” place thus emerges from the composition, which will become a
crossroads of exchanges between the occupants of two of the buildings, with
the third building serving as outdoor storage.

Another aspect of the composition refers to the idea of the “perceptual”. Depending
on the observer’s location in the neighbouring forest, the scales of
the buildings are relative. The smallest seems larger as one approaches, even
though it has the same profile as the biggest, which is then located farther
away in the field of vision. This subtle experience of the “subject”, which blurs
hierarchies, creates equivalence among the programmatic components of the
whole: as if this were a deliberate refusal to establish a hierarchy within the
family nucleus involved.

The layout is geometrically designed so as to circumscribe two of the landscape
components that characterize the wetland nature of this lakeside property. Two
wetlands are preserved and form the collective landscape of the built complex,
relegating the lake to a truly public structure. A large “plate” of black
wood links the three structures to establish a common base, a sort of carpet
for people in an environment otherwise left in its raw state.
Large cutouts are then made in each “shape”, also of black painted wood, to
reveal the interior materiality of the red cedar buildings. The exterior spaces
thus created offer transitions between the landscape and the construction
boundary.

Alain Carle Architecte uploaded The Wetlands through Add A Home.
Add your own project for the chance to be featured in Editor’s Picks.