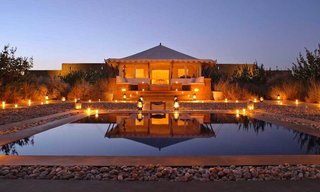 Sometimes you can tell, just by the sound of the name, that a hotel is going to be something special. Without knowing the medieval history of Jaisalmer, or even much about what a serai is, there’s a certain ring about it. The Serai, Jaisalmer. And if you’re aware of the ancient Kingdom of Jaisalmer, or if the word serai conjures an image of a tented camp, a desert way station, then you’re practically there already.

The basic Tented Suites are built on permanent stone bases, which goes a surprisingly long way towards changing the atmosphere from “roughing it” to “splendid seclusion.” The Luxury Tented Suites add walled gardens with sunken pools, and the Royal Suite is worthy of its name, with a private spa and separate tents for dining and entertaining.

Raison d’Etre handles the spa treatments, both in the Royal Suite and in the dedicated spa tents. It’s an example of how tough conditions — the desert — bring heroic efforts from the staff. Here luxury isn’t strictly a function of absolute plushness: there’s a difficulty factor to be taken account of as well. It’s perhaps a more common sight in the luxury safari camps of southern Africa, but the Serai, Jaisalmer proves it’s a concept that’s equally well suited to the deserts of Rajasthan as well.

The Serai in Jaisalmer, India