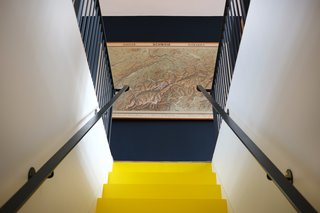 The 2-storey property was built as school science laboratory in 1935 but after the main school was demolished in the 1980s, was converted into a recording studio. It was subsequently squatted causing many issues to the neighbours. The owner then converted the property into two self-contained flats and rented them out until the client bought the whole property in 2015.

It is situated at the end of a terraced road in London, E7 between a Victorian cottage, which was used by the school caretaker, and a single storey power sub-station, built at the same time as the science lab. The house features red brick to the front and yellow brick to the remaining sides, which form the outer leaf of the external walls, whilst the inner leaf consists of a concrete steel-reinforced structure. Two white rendered bands accentuate the rectangular proportions of the building and the nine very large windows to the front create a remarkable industrial look.

The client was looking for a family house with space to spare for visitors and a home office and there was a clear vision to keep and restore original features such as the solid pine herringbone flooring, perimeter terracotta tiles and the existing concrete stairwell with metal balustrade. New period-correct double-glazed steel framed windows have been reinstated. Due to the concrete construction and existing layout, the two floors were physically disconnected, and it was important to create a link between the ground and first floor in order to make it feel like one house. New fittings were chosen or designed to be in keeping with the period and former use of the building. This is reflected in the metal balustrade and handrail on the first floor, the white metal stairs leading up to the roof and the use of stainless steel for the worktops and kitchen island.

The house was stripped back to its concrete walls and ceilings in order to install highly efficient perimeter and internal wall insulation, but existing original features were restored or reinstated. Two new openings were created in the first floor and roof slab in order to create access to the roof and better circulation. The approach to the programming and sequencing of the rooms and circulation spaces was derived from a strong desire to not have any internal rooms and making the best use of the abundance of natural light. The industrial sized structural openings of the windows essentially provided the grid for placing the internal walls, especially on the ground floor.

The ground floor became the private areas of the house and include two large bedrooms with bespoke fitted wardrobes and storage, one smaller bedroom for guests, a utility room with all services and boiler and a generous central hall connecting all the rooms and the first floor. A new staircase was inserted to create the physical link with the first floor and to introduce more natural light to the ground floor.

The new stairs create four distinct zones on the open-plan first floor with the dining area to the left and living area to the right. In the opposite corner lies the kitchen with stainless steel worktops and the home office/fourth bedroom behind the fitted cabinets.

A white steel staircase with painted plywood treads leads up via a large electronically operated skylight to the roof terrace. The staircase was designed to reflect the 1930s aesthetics of the house and to let the light fall through it, white powder-coated metal mesh was used between each step that create beautiful shadow patterns along the wall.

The roof is externally insulated and features a wild-flower green roof. The decking and planters are made with Millboard, which is very lightweight, virtually maintenance free and made of 100% recycled plastics. Both have integrated drainage to let the rainwater run off to the existing downpipes. The planters hold enough soil to plant small trees and include ample storage space for gardening tools and furniture. The roof terrace provides views across Wanstead Flats, the BT tower and Canary Wharf yet is completely private and secluded.

uploaded The Science Lab through Add A Home.
Add your own project for the chance to be featured in Editor’s Picks.

Roof terrace with planters for fruit, vegetables and herbs

The terrace is surrounded by a wildflower meadow green roof

View across the first floor

View towards the original stairwell

Ground floor hall with doors leading to the bathrooms