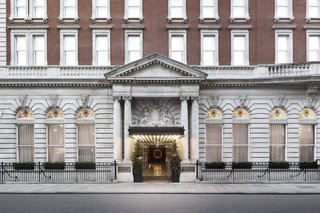 Yes, it’s owned by one of the biggest of the big chains. But it’ll get you closer to the mark to think of the London EDITION not as a Marriott, but as an Ian Schrager hotel — he is, after all, Marriott’s partner in the venture. Or if you’re a design groupie, you might think of it as a Yabu Pushelberg hotel (the interiors are the work of the expert Torontonian hospitality-design firm). Better yet, if you’d prefer to stick to the facts, here they are: the London EDITION is a row of old Georgian townhouses on Berners Street in Fitzrovia, renovated and given the luxury-boutique treatment by some of the biggest players in the game.

It happens to be just down the road from the Sanderson, one of the original crop of Schrager hotels. The London EDITION is no knockoff, though — a cursory look makes it abundantly clear that this is a more sedate, more elegant, more grown-up affair. The public spaces are a subtly postmodern mix of disparate eras, drawing inspiration from the 1835 houses, the original 1908 hotel, and bits and bobs from the history of modernism, from mid-century to the present. Meanwhile the rooms take a more contemporary tack, all simplicity in rich wood textures and modern-classic furnishings. Earth tones dominate, historical details abound, but you’re never unaware that this is a 21st-century interpretation rather than a period piece.

The rooms, of course, are only half the package; perhaps less, when it’s Ian Schrager we’re talking about. The London EDITION features no fewer than three bars, the wide-open and welcoming Lobby Bar, with its extremely serious cocktail menu, the intimate, reservations-only Punch Room, and the food-focused Berners Tavern. This last qualifies as a restaurant as well, and it’s got no less a light than the Michelin-starred Jason Atherton as its head honcho. All three are classic nightspots in the boutique-hotel mode — modish and attractive, both in design and in clientele, and with something of a talent for getting talked about. London essentials, all of them.