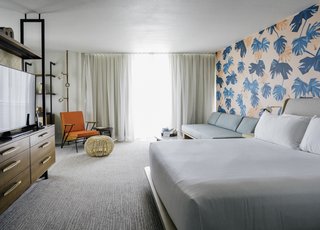 While walking the Hawaiian streets of Honolulu, it’s almost impossible to avoid the connection that Oahu's South Shore holds with its midcentury past. Along with many original structures still standing tall in this tropical metropolis, a number of new efforts have created establishments that recall the glory days of midcentury Waikiki.

One such example is The Laylow, a new 250-room hotel on Kuhio Avenue that’s inspired by the elegance of the 1960s jet-setter lifestyle. Housed in a building that was originally built to be the Coral Reef Hotel in 1969, it’s now Marriott’s latest property in their Autograph Collection—and just opened its doors in March 2017.

For the Portland-based creative agency that’s responsible for the entire project, OMFGCO, it actually started out as a breezy assignment that included creating the hotel’s name, brand, and story. However, the project quickly expanded to be much more than that—including the task of creating everything from the concept and branding, to the interior design of the rooms and public spaces. Needless to say, it quickly became the biggest project they’ve ever taken on.

With its 15 floors, The Laylow stands above Kuhio Avenue in Honolulu’s Waikiki neighborhood on the South Shore of Oahu. The cantilevered awning in the front of the hotel is made out of ipe wood and was designed by Kansas City-based design firm DLR Group. As it wraps around above the bar, the material changes to sapele wood.

With its 15 floors, The Laylow stands above Kuhio Avenue in Honolulu’s Waikiki neighborhood on the South Shore of Oahu. The welcoming, tropical lobby is located on the second floor, providing a place for guests to enter peacefully away from the hustle and bustle of the street.

A 100-foot-long wall of terracotta breeze blocks designed by Patricia Urquiola for Mutina—called Tierras 3D—surrounds the reception window and extends into a seating area.

Standing behind the reception desk is an installation designed by the OMFGCO Art Department. It includes 70 vintage dashboard hula nodders.

Throughout the hotel, the designers sourced a mix of new, custom, and vintage furnishings. The outdoor spaces include furniture by Kettal, custom cabanas, and lounges inspired by Locus Solus Lounge Chairs.

The bar is lined with vintage bar stools by Arthur Umanoff, which OMFGCO sourced from all over the world via 1stdibs, Pamono, and Etsy. Fritz Mesenbrink of OMFGCO tells us, “It was challenging to get that many of his stools in the same place, but we got them and had them all restored beautifully.”

The public spaces are filled with both vintage furnishings and custom designs by OMFGCO. The Hideout bar features a Marmoreal countertop, which consists of an engineered marble developed in collaboration between dzek and British designer Max Lamb.

The property includes a saltwater swimming pool with a bamboo-shaded sun deck.

The guest rooms feature original designs by OMFGCO and Randolph Designs, one of which is a custom midcentury-inspired wall unit that acts as both media storage and a space divider. OMFGCO worked with Slowtide to create this custom modern floral print that can be found on the bedroom walls and in custom pool towels.

Another custom installation by the OMFGCO Art Department includes a Hideout sign made with modified cocktail umbrellas.

Along with creative craft cocktails coming from the bar, the on-site restaurant serves Pacific Rim and American comfort food. Jewelry designer Anne Korte of AK Studio made the custom curtain for the project.

Shown here is a few of the details dreamed up by OMFGCO, including the custom paper cups served at the coffee shop and the monstera pattern they created for the project.

OMFGCO created a custom tile to cover the tops of the tables on the Hideout lanai.

The store sells a mix of goods, some of which have been made custom for the hotel including hats by Kiriko, beach towels and hats with the hotel’s wallpaper pattern, and the ukuleles that are in each guest room.