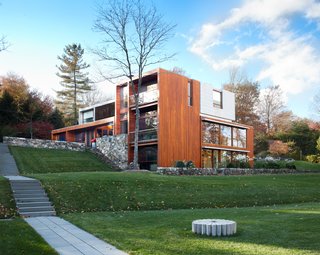 Now offered at under $7 million, a renovation of Noyes’ Brown Residence uses architectural mimicry and contrast to sustain the late architect’s concepts.

During the 1940s and ‘50s, the Harvard Five—Marcel Breuer, John Johannsen, Philip Johnson, Landis Gores, and Eliot Noyes—conducted experiments in residential design in New Canaan, Connecticut, that bestowed the bedroom community with some 100 midcentury modern homes. Many of them have been torn down, rendering the ones that stand all the more precious. Currently on the market, the Brown Residence originally designed by Eliot Noyes and renovated by Joeb Moore & Partners Architects enjoys a sculptural quality and a deep connection to the landscape. The restored home—where, incidentally, Ang Lee’s The Ice Storm was filmed—has dropped $1,045,00 for an asking price of $6,950,000.

The 8,269-square-foot residence sits atop 2.8 acres landscaped by Reed Hilderbrand.

A two-story glass curtain wall allows for natural light and views to permeate the space and the open stairs.

The family room enjoys broad views of the landscaped property and leads to an outdoor terrace and fireplace.

The formal dining room can open onto the terrace as well, while sliding pocket doors give the option of privacy and intimacy.

On the second floor are two ensuite bedrooms and a master suite with a private balcony, gas fireplace, and dressing room. The separate pool house, which has stayed true to its 1950 footprint, boasts two other bedrooms.