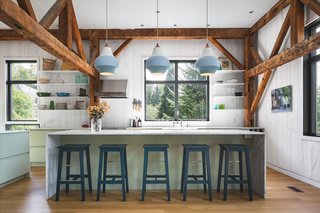 The Barn is a rebirth project that turned a farm building that had outlived its usefulness into a warm, open, versatile communal family space. The project saved a 100-year-old building from impending loss and preserved the vernacular quality of the building while updating it for use.

The homeowners wanted to turn the old barn on the property of their chalet into a secondary country residence where family, friends and kids could gather. Additionally, being busy people, they wanted a veritable safe haven, an island of peace far from the frenzy of their daily lives. The finished product had to feel like a self-contained retreat, as if it could be a hideaway in Bali when the wind blows through on a summer afternoon.

The overarching goal was to preserve the rustic character of the original building without making any compromises in terms of modern comfort. To this end all the redesigned space separations were demarked by the existing wooden structure. Furthermore, we wanted to avoid the introduction of vertical elements in order to preserve the eye-line to the view, so all appliances like the refrigerator had to be easily hidden under eye level and work with the original, century old structure.

The isolated location of the project site complicated deliveries, communications with subcontractors and the control of made-to-measure elements. Because the foundations had to be reworked while preserving the existing character and structure, every salvageable piece of the original hemlock construction was numbered and carefully stored next to the site. Added to that were the complications of working with the seasonal weather, with winter being especially difficult. The entire project took nearly two years to complete.

The space that once sheltered cattle became the main floor. Thanks to its various open, semi-open and closed areas, it provides different degrees of privacy. Its 30-foot ceiling creates a space that really breathes and invites the natural surroundings into the space. Additionally, the large windows take advantage of the spectacular view of Sutton Mountain and the virtually untouched ancient agricultural landscape.

uploaded The Barn through Add A Home.
Add your own project for the chance to be featured in Editor’s Picks.

The dining room of The Barn by La Firme

“The overarching goal was to preserve the rustic character of the original building without making any compromises in terms of modern comfort,” says La Firme. The team hid modern appliances (like the refrigerator) below eye level and worked with the original, century-old structure of The Barn.