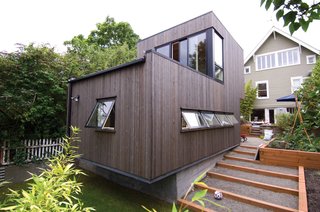 This small two-story art studio replaces an even smaller, uninsulated, structurally unsound, rat-infested two-car garage. With impending demolition, an opportunity was presented to celebrate the life of the anonymous building. Hundreds of holes were drilled into the building, resulting in a kaleidoscope interior during the daytime and a pumpkin lantern at night. A party was held, and the next day the old garage was demolished.

The previous garage foundation was re-used for the new architect’s studio. The old crawl space was infilled with fill material to permit the installation of a new concrete slab on grade. A new courtyard space created by the insertion of the two-story architect’s studio and the pre-existing 1912 farmhouse serves as an outdoor living room for the family. The new artist studio "pops out" in two directions, providing for covered firewood storage at one end and sheltered bicycle storage at the other end. The south wall of the old garage building is kept in place to serve as a screen wall to the adjoining property. The space defined by the old garage wall and the new artist studio serves as an entryway for the studio, and a courtyard space for doors to open out to. The two-story structure provides for a loft space to look over the main level. While only 450 square feet, the studio provides working space for five individuals.

Robert Hutchison Architecture uploaded Studio for an Architect through Add A Home.
Add your own project for the chance to be featured in Editor’s Picks.